Some critics say that I, Eccles, am occasionally rude and insulting. I don't see it myself, but then I came across the following advert and couldn't resist. 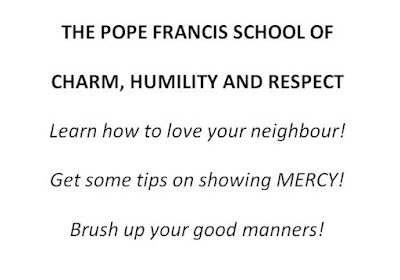 A chance to brush up my skills!

The course started badly, as one of the assistant tutors, Fr Müller, was not present. "He's at Mass, Holy Father," explained an aide.

"Drag him out!" shouted the Pope. "God is used to being kept waiting, but I AM NOT."

He then went on to explain that the New Ways Ministry had recently given him an award as the most humble pope since Alexander VI, and he was confidently expecting the Freemasons to award him the Order of the Golden Moose for services to humility. So we could certainly learn from him! 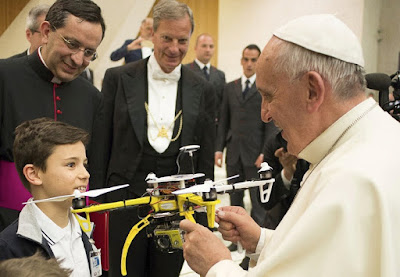 "A drone! With a radar attachment to detect neo-Pelagians and zap them!

A Jesuit in a rainbow cassock wandered in, smoking a strange-looking cigarette. "Hey, man, is this the Coccopalmerio?" he asked, and promptly fell over. A fellow-student explained to me that "Coccopalmerio" is slang for a particular type of party, although he did not give details.

Meanwhile, the Pope had taken advantage of the break in the proceedings to fire one of his cardinals. In fact, he said "Off with his head!" but it was unlikely that things would be taken that far, and the Swiss Guards would simply break one of his legs. This is what "mercy" means!

Pope Francis concluded his course by explaining that, no matter how charming you were, you could easily be misunderstood. For a Jesuit, this is not a problem, of course, but he showed us a tweet from one of his most loyal sycophants. 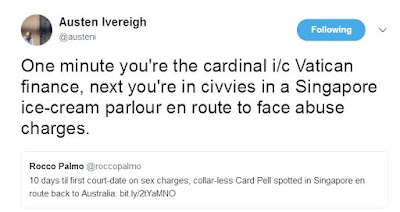 This is not gloating, this is mercy.

"Unfortunately Ivereigh couldn't attend today's class," he said, "which is a shame, as he could learn a lot from it."

What a pity there isn't some sort of organization that could give training to Catholic commentators such as Austen, so that they could express themselves clearly and avoid being misunderstood!