The Catholic Doomsday clock was initiated in 2013, as a way of warning against the inevitable meltdown that would follow should Pope Francis attempt to say anything "infallibly".

Whereas previous popes have refused to "go nuclear" since infallibility was defined in the 19th century, there has been an increasing risk that Pope Francis would say something mindlessly stupid ex cathedra. 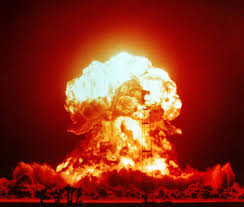 Is the Vatican about to go nuclear?

The Pope has so far used a variety of weapons in an attempt to impose a new version of Catholicism: probably the least aggressive are tweets (produced by a teenage intern), which are indistinguishable from the platitudes of the Dalai Lama; more striking are his "air attacks" consisting of new off-the-cuff doctrines expressed on aeroplane journeys, and usually "explained" and "interpreted" afterwards; he is also a dab hand at deploying sockpuppets (Spadaro, Ivereigh, Faggioli, Marx, Daneels, oh there's too many to name...) to say the unthinkable, usually with a healthy dose of abuse thrown in.

Then we come to Amoris Laetitia, ghost-written, not based on anything agreed at the synods it followed, not even properly read by the Pope. A ticking bombshell, which brave bomb-disposers have attempted to defuse with DUBIATM technology. Still it continues to tick, tick, tick...

We may ignore Laudato Si', an attempt at building a "green" bomb which would destroy minds but not doctrine. Well, everyone else does.

Now, however, the threat level has reached "Magisterial". All the changes due to Vatican II, even the ones which are nothing at all to do with Vatican II, have been declared "irreversible". 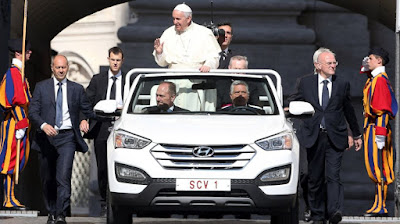 Like his Popemobile, Pope Francis has no brakes, and no reverse gear.

Yes, the Spirit of Vatican II has won, and the threat level is now Magisterial. Pope Francis can repeal decisions made by his predecessors, such as Benedict XVI, John-Paul II, Pius X, Pius V, Peter, ... and even Jesus. BUT NOBODY ELSE HAS THE NUCLEAR CODES.

So the threat level is definitely Magisterial, if not Hysterical, "What I say goes, and cannot be contradicted, even if it contradicts Catholic teaching." 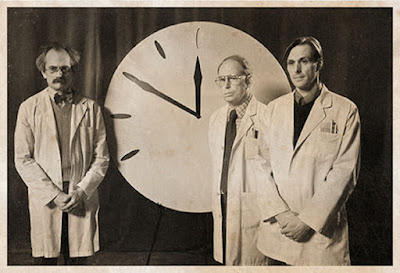 Theologians warn that some heresy may soon be proclaimed Infallibly.

Excuse me while I head for my bunker.