The crimes of Cardinal Pell

A transcript of a confidential telephone conversation between Mgr Embezzla of the Vatican Bank and Superintendent Didgeridoo of the Australian Police.

E: Well that didn't go to well, did it? We asked you to frame Cardinal Pell for child abuse, so that he would stop his investigation into our financial - ahem - irregularities, and you've been found out!

D: We did our best, cobber. We wanted to nail him too, you know, for his opposition to same-sex marriage, and to the other plans we've got. We've had a crack team working on the case. 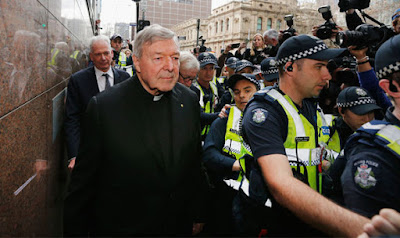 "We heard he possessed a beretta, so we sent 10 officers to arrest him."

E: Yes, and it turns out that all the dates and times are wrong. Even Pope Francis can give him an alibi.

D: Don't worry about him. He won't give a definite answer to any questions that Pell's counsel puts to him. Even cardinals can't get a straight answer from the Pope.

E: Yes, but the 200 witnesses who were present when he offered Mass?

D: We think he bribed them all with promises of eternal life.

E: Well, never mind that. Can you trump up any other charges?

D: Yes, we think he may be the infamous swagman who was part of the Waltzing Matilda gang. 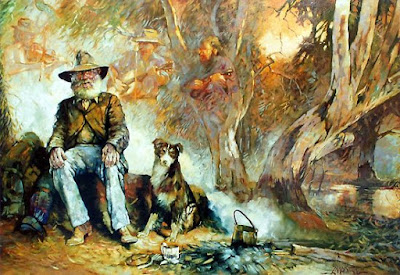 Could this be Cardinal Pell?

E: Sounds good. Get him for jumbuck-rustling! Will Matilda give evidence?

D: No, she died about 100 years ago. Although we might try forging some emails from Banjo Paterson. Or his descendant, the liberal Catholic, Guitar Paterson.

E: It all sounds a bit flimsy to me.

D: All right, one final idea. He's fond of cricket, isn't he? 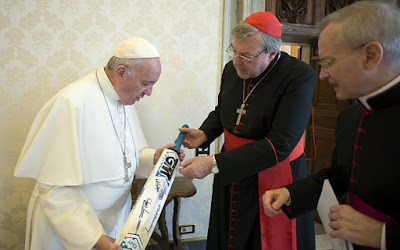 Cardinal Pell explains how he helped Australia win the Ashes.

D: Then he's obviously the mastermind behind the new Aussie ball-tampering scandal. He brings shame on an entire nation. If that doesn't put him behind bars, nothing will.

E: Look for traces of incense on the cricket ball. If you can't find any, we can supply some.

D: It's great to work with you.