What do the yoof really want?

As the Yoof Synod continues on its merry way, we have asked some of the participants to explain what the Yoof really want, as they are obviously too young to decide for themselves. 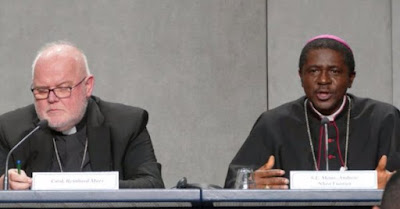 "Schweinehund! All I asked him for was a little cuddle..."

It has become clear to me that the Yoof are very interested in LGBT issues, and want us to change Catholic teaching so that same-sex relations are recognised as just as good as marriage. If not better. So far we are being thwarted by those wretched African cardinals, who, as my mate Walter Kasper pointed out, need to shut their traps and go back to Bongo-Bongo land.

As a subsidiary issue, what the Yoof also like is fat hairy cardinals supported by extravagant church taxes, who want to give Communion to anyone who is a fully paid-up member of the Church. I totally agree with them. 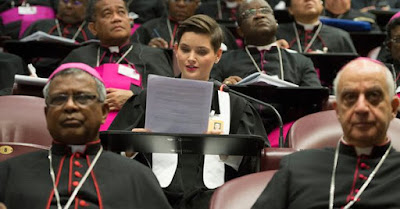 "I am living proof that it's not just handsome young men that the cardinals like."

I am deeply honoured to be the only female cleric attending the Yoof Synod. Obviously what the Yoof want is more female clerics, as Jesus obviously got things wrong when he appointed male disciples. Don't be scared, though - nobody is likely to notice that I'm a woman! Indeed some old man called "Uncle Ted", whom I met in the corridor, invited me back to his room by mistake, thinking I was a callow seminarian! Still, he's found his glasses again now.

At this Synod I feel accepted, and my voice is heard. What the Yoof want is more short-haired females dressed as priests. This is all they ever tell me. 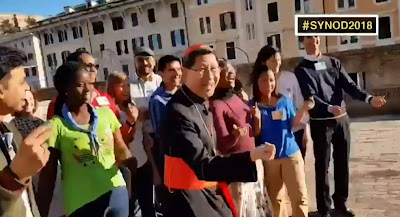 They tell me I am likely to be Pope Francis III, following on from that excellent man Blase Cupich as Francis II. Being only 61 years old, I am practically a Yoof myself, and I certainly know what the Yoof like to do - to dance around clicking their fingers, to go clubbing, to listen to Bono Geldof, Red Floyd, Pink Hot Chilli Roses, Guns 'n Peppers, and other contemporary bands.

They call me the "tearful" cardinal, and it's true that I am a very emotional chap. What the Yoof are asking for is a new liturgy where there will be more finger-clicking, and also several places where they are encouraged to burst into tears. Onions will be supplied. Click-click! 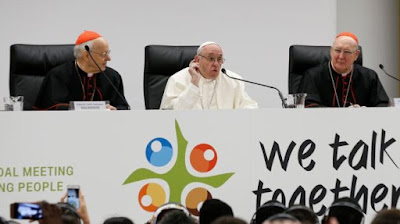 "Cardinal Baldisseri has already written a report telling you what you want."