1. After her triumph against the hosts of Jacob Gogg-Magogg in the month of December, Maysis said privily to herself, "Thou hast done well in thy battle against the Conservatites, but now cometh a greater challenge."

2. Thus when the new year came, she went to the House of Common People, saying, "Behold a wondrous deal that hath been negotiated by the Pharaoh Juncker after tough discussions with his ministers, Don-ald Ivereigh-Tusk and Michael Bar-nier."

3. "And when they showed me the fruit of their negotiations, I signed at once, for they said there was no need to read it." 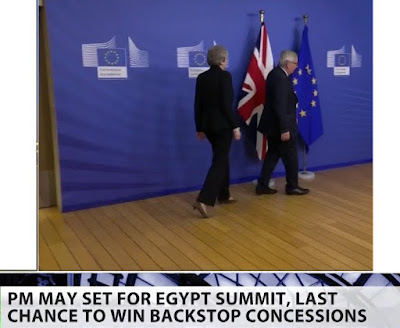 4. Thus the House of Common People voted on the deal proposed by the EUgyptians, as follows:

7. So Maysis spake out, saying "Shall we try this again with a House of Common People's vote?"

8. But the Corbynites were displeased, saying, "We have no confidence in thee, O Maysis." Thus there was indeed another vote, but this time Maysis escaped her doom. 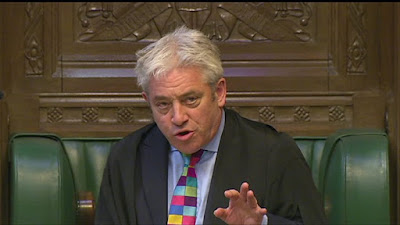 Ber-cow the Speaker is given a tie of many colours as a sign of favour.

9. And there were many other votes in the House of Common People, after which it was agreed that there were six hundred and fifty different ways in which the children of Bri-tain might leave EUgypt, but each one was supported by precisely one person.

10. Meanwhile, the EUgyptians said "Let us launch a charm offensive against the people of Bri-tain."

11. So the great prophet Don-ald Ivereigh-Tusk spake out, to warn the people of a special place in Hell for those who wished to leave EUgypt without a deal. For he said unto them, "There shall be a wailing and gnashing of tusks."

12. Then Don-ald was joined in the charm offensive by another prophet, Guy Ver-Jehoshaphat, who said, "I doubt if Lucifer would welcome them, for they would divide Hell."

13. And this was the dawn of a new way of speaking, which is nowadays called diplomacy. 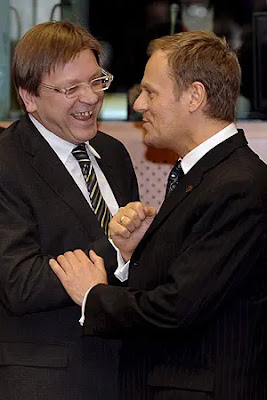 Don-ald and Guy discuss the special places of Hell.

14. However, the story endeth not there. For, as the people of Bri-tain tried to decide whether to leave without a deal, to leave with a bad deal, to remain in EUgypt, to vote again, or indeed to delay the 50th article, there arose a new leader, named Chukhas Ur-money.

15. Now Chukhas was joined by six other Labourites, who spake out to Cor-byn, saying "We wish to remain, so we are going to leave. Also, we do not wish to be confused with the Independence Party, so we shall call ourselves the Independent Party."

16. And soon many others flocked to Chukhas, from the Corbynites and also from the Conservatites.

17. Therefore, those who thought they knew what was going on, now discovered that they did not. And this included Maysis. 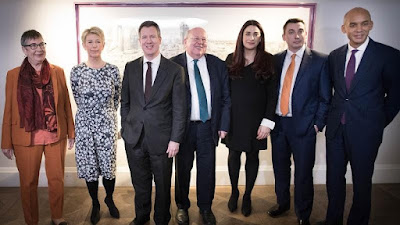