The thrilling story of how Emeritus Pope Benedict XVI escaped from prison in Regensburg and made his way back to Rome.

We all thought that he was taking a trip to see his sick brother, but the true story was apparently far more sinister.

Bruvver Bungalow sets the scene for us.

Next, Marshall Taylor sees a photo of Benedict and asks a friend of his, a qualified boxer, to give a diagnosis of the old man's health. Popeye Brutus, from his great experience of 93-year-old boxers, decides that Benedict has been punched on the hooter. 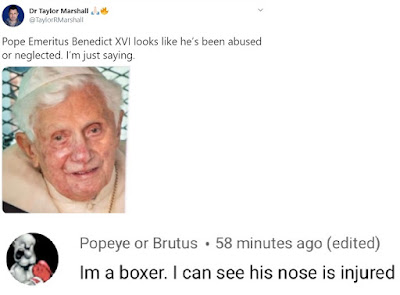 Could there be another explanation why Benedict looks about 90?

We knew that Francis was angry with Benedict - mostly jealousy because Benedict had read some books without pictures in, won the 2019 award for "best behaved Pope", and knew the entire catechism of the Catholic Church off by heart in six languages. Now was Francis's chance to remove him from the game.

Things were looking black for our hero, imprisoned in Stalag-Kasper-Marx 3, the notorious prisoner of war camp, where the most dangerous enemies of the Pope often end up. Surely that's Henry Sire making a glider? And Matthew Festing seems to be revving up a motorbike... 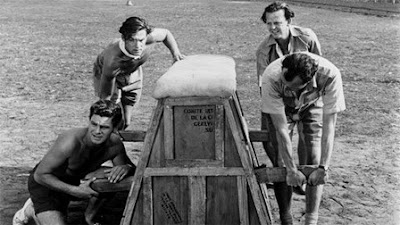 After that, Benedict escaped to Rome, using a forged passport in the name of Von Ekkles, disguising himself as a vacuum-cleaner salesman from Ulm. 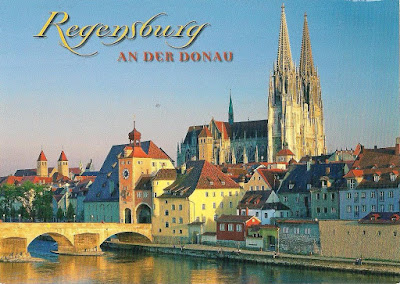 "Having a lovely time. Glad you're not here. A card sent to the Vatican.

Soon to be another major film starring Anthony Hopkins as Benedict, Jonathan Pryce as Francis, and Brad Pitt as Archbishop Gänswein.