Magi "traumatized" after being asked where they came from

Bethlehem, 4 B.C. approx. The three Magi, Caspar, Melchior, and Balthazar (real names: Chas Parr, Mel Keir, and Bill Tazzer), have declared themselves "totally stunned" after they arrived at the stable in Bethlehem and were asked where they had come from. 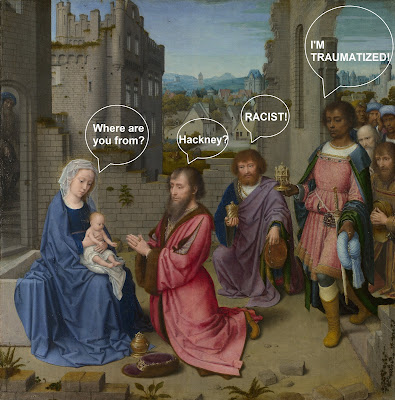 The question you must never ask. After travelling for several weeks from Persian lands afar, the three kings presented their offerings of gold, frankincense and myrrh, which they claimed to have bought in a gift shop in Bethlehem, even though the items were in a bag bearing the legend "Ali's Bazaar - eveything for your Adoration needs". On being asked "Where do you come from?" they originally replied "Hackney" (a suburb of Jerusalem), although it was later revealed after a gruelling 15 seconds of traumatic questioning that their background was more exotic. "We're not angry with the Holy Family," said Chas. "All we want is for them to be driven out into Egypt." It was later revealed that the three men had a history of baiting royalty, and that King Herod himself was deeply upset by what they said when they visited him. However, Herod did not ask them about the origins, so history is sure to look kindly upon him. 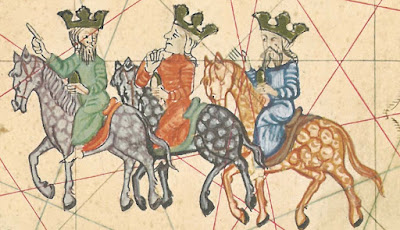 "Well, winding up King Herod was a good start. What shall we do next?"
Posted by Eccles at 15:15