The judges of the Eccles Bad Hymn Award are very pleased to welcome Sister Marie Lydia Pereira, who is going to tell us about her hymn Go, the Mass is ended. 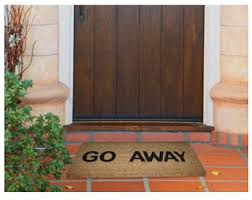 E: Now, Sister Marie, I think I've managed to extract the main message of your hymn, "Go, the Mass is ended," not least because you repeat it eight times. And a very good message it is too, when the priest says it at the end of the service.

MLP: That's right, Eccles. Of course some traddy priests will insist on saying "Ite, Missa est," which nobody can understand. So the congregation just hangs around wondering what to do next.

E: Yes, it's like guests at a party, isn't it? You look at your watch, you say "My, is that the time?" You yawn a bit, you get out the vacuum cleaner, you say, "I see there's an excellent bus passing in the next 10 minutes," but they just don't take the hint, do they? 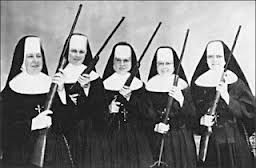 Sometimes there is only one way to make guests leave.

MLP: You're so right, Eccles. And even in more liberal services, the priest's dismissal tends to get drowned out by the natural gossiping that we indulge in after taking communion.

E: So I can see that a hymn which says, "Clear off, now," would be very useful to a priest.

MLP: Well, exactly. What the congregation doesn't always realise is that the priest may have other appointments. For example, he might wish to bless the church band's new instruments (guitar, comb-and-paper, kazoo and vuvuzela) in readiness for another mass later in the day. 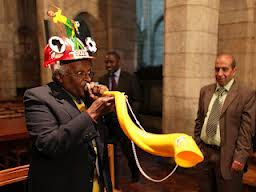 A requiem mass (Gregorian chant), played on a blessed vuvuzuela.

E: But isn't the dismissal supposed to be said by the priest, not repeated eight times by the congregation?

MLP: Alas, it's very hard to get priests to sing my hymn as a solo, Eccles. 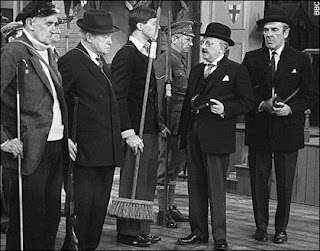 Now men, I want you to gladden all who meet you. [Do you think that's wise, sir?]

MLP: Bank manager, eh? Should I insert a verse about "Save your money, spend it wisely?" No, that's probably a little off-topic.

E: I think the hymn is perfect as it is, Sister Marie. No need to write any more. Go, the interview is ended. 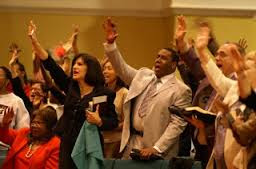 Hands up if you want to leave now.