So in Part 1 of this self-help guide we saw your through to election as Pope (thanks to the efforts of the St Wormwood and Gall Mafia, which pushed out your predecessor), and gave some tips on what to wear, what to eat, and where to live. What do you do next? 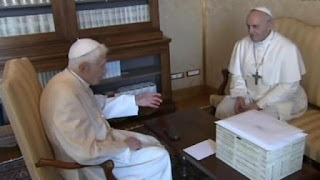 "And don't forget to feed the papal rabbit!"

Well, you can go on visits to your faithful flock around the world - popes do a lot of that stuff - meeting exciting people such as Castro, Obama, and that communist idiot in Bolivia. Maybe even some Catholics - apparently there are quite a lot of them out there if you look hard enough. But if you go travelling, watch out for journalists! They will do their best to get on the same flight, and they will insist on asking you difficult questions to which you haven't prepared the answers. Make it clear that you are not speaking infallibly, and you will probably change your mind again tomorrow.

Wise popes avoid questions altogether, e.g. by reading the in-flight magazine (yes, I know, dire, isn't it?), pretending to sleep (difficult to maintain for more than about 12 hours), or simply asking the stewardess to move you to another seat. In the latter case you'll probably end up next to a screaming child, but if you can stop the brat from howling, then you'll get the reputation of being a Loving and Sensitive Pope - even if you did pour a whisky down its throat when nobody was looking. 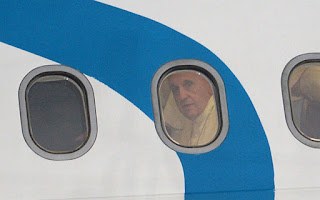 Another things popes are expected to do is to write encyclicals. These are long documents that necessarily contain a lot of waffle but should also have a sting in the tail that is guaranteed to upset non-Catholics. WRITE YOURS IN LATIN. Remember that Latin is the language of the church - not Italian, not Chinese, not even English. If your Latin isn't up to it, get a friend to help, don't rely on Google translate. Pick a snappy Latin title to bring in the punters - Nemo Me Impune Lacessit ("you lookin' for trouble, Jimmy?") would be a good one in the context of war, peace, and "turning the other cheek". Or try Sona Si Latine Loqueris ("Honk if you speak Latin") for an encyclical on the use of Latin in the Mass.

Meanwhile, you will find yourself being pestered by your cardinals. The German ones are the worst, but there are some pretty strange ones in the USA, UK, etc. as well. They will telephone you at 4 a.m. to tell you "I've just thought of this exciting new heresy we could try," hoping that you will be too tired to send them packing. Before you know where you are, you will have agreed to hold a synod just to keep them quiet. But it won't. 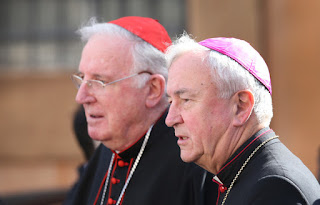 Just hypothetically, suppose that you have agreed to hold a synod on Torture. There may be a lot of pressure for one - the American organization Catholics for Torture is very influential - and so it may be hard to say to them "You're a bunch of idiots. Get lost." Lots of bishops and cardinals would be happy to have a three-week holiday in Rome three weeks of deep and meaningful discussions, rather than having to sit in their boring dioceses serving their flock and protecting it from the wolves.

Some of the synod team will be convinced that Catholic Doctrine on Torture can be changed. If someone keeps his aunt locked up in a cellar, and goes down regularly to stretch her on the rack, should that be a bar to his taking Holy Communion? Or should he abstain from stretching on the day he goes to Mass? Obviously, we can't go so far as to ask him to release her. These are deep waters, and about 1/4 of your synodders will be pressing for complete liberalism here - they're the ones who don't believe in things like sin, redemption, confession, absolution, repentance, etc.

"I've got to go to Mass now, then write an article for the Tablet, but I'll be back later.

Writing these pieces have convinced me that being pope isn't easy - it's not just kissing people's feet and releasing birds into the air. More on this, later, your Holiness.