News from the Synod

The Synod on the Family has been going very well this week, but the reports you are getting from people like Fr Rosica of Sue and Litigate Salt and Light are not really getting to grips with the full knockabout excitement that we are experiencing, probably because, unlike me, he doesn't have a red hat, and so can't get fully involved with what the senior people are doing.

We were told that this was an occasion for "dialogue" and our cardinals (and others) have definitely been putting this into practice. Cries of "heretic", "weasel", "bigot" and "worm" reverberated through the Vatican on the first day, and when the reporters came to ask us how things were going we kept a straight face and said that our discussions were "amicable". 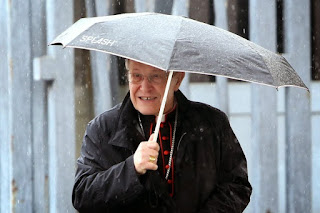 After someone emptied a bucket of water on him out of a window, Cardinal Kasper was taking no chances.

Every evening a group of us go to the Cardinal bar, to relax and unwind after a hard day's rewriting Catholic doctrine. We used to play a drinking game, called "Cardinal Puff", as seen on Dad's Army - Cardinal Pell usually wins, as Australians are more used to hard drinking than the rest of us. However it was condemned as "homophobic" by Cardinal Baldisseri, so we gave up playing it. 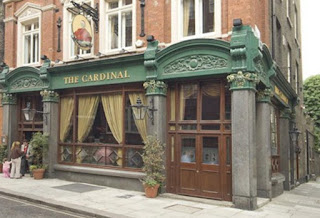 Chilling out with Pell, Müller, Napier and the lads.

Instead we had a competition, "Guess the weight of Cardinal Dolan", and I won 100 euros. To end the proceedings we debagged Cardinal Danneels and threw him into the Tiber. Well, he deserved it, but it was a bit unpleasant for the fishes.

The next day, after a long session of amicable debate (one cardinal knocked out cold, another taken to hospital with stab wounds, and a third one now hobbling around on crutches), a certain English cardinal, who must remain anonymous, invited us all to a "gay mass" at his titular church, the Chiesa di Sant'Alfonso di Liguori all'Esquilino, but we persuaded him to put it off to a later date. Instead we celebrated the forthcoming "Year of Mersey" by going down to the pub again, and singing Cilla Black songs. They're all pretty welcoming to those with alternative lifestyles, especially "Anyone who had a heart", "Step inside, love", "The other woman" and "Love's just a broken heart". 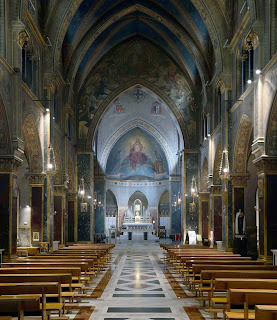 No gay mass here for the time being.

We're expecting Tina Beattie to turn up at any time, possibly as part of a topless Femen-style demonstration, as she's very annoyed that so many celibate males are discussing Catholic doctrine. It seems that she has problems with the teachings of celibate males, which is a bit awkward for someone who claims to be a Christian.

We have tried to persuade dear Tina that the lovely Cardinal Sarah is in fact a woman, but she is not convinced. Still less, that my own adopted Cardinal Poli is female. In fact, he or she spends all day drawing caricatures of Walter Kasper on the synod agenda, so it's a Poli-Wally-doodle all the day. 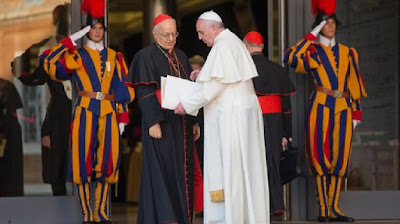 "And here's a list of books missing from the Vatican library."

Anyway, the third day's synodding was much like the others (perhaps a bit nastier - we had to call the Swiss Guard in several times to break up fights involving the German cardinals). Our pub visits are quieter now that Cardinal Kasper has been barred for being too rowdy - the landlord thinks that sticking straws in your hair, dancing on the table, and singing "Don't laugh at me 'cause I'm a fool" isn't really conduct worthy of a prince of the Church.

Meanwhile, some of us have been invited round to Pope Francis's apartment for tea tomorrow - at this stage I am not sure whether we'll get something nourishing, or whether it will just be fudge.