The world was in a state of shock today, after it was revealed that during his American trip Pope Francis had had a personal meeting with someone whose extreme views on same-sex marriage have made them a hate-figure throughout the civilised world. 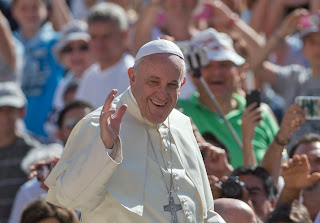 "He may look like a friendly uncle, but he has disgraced himself."

Said one commentator, "I was really looking forward to the pope's visit to the USA, and in fact I thought that this might even be a good occasion to become a Catholic. But after I heard about Pope Francis's meeting with Barack Obama, I realized that I could not be a member of a church led by someone who was capable of talking to people like that." 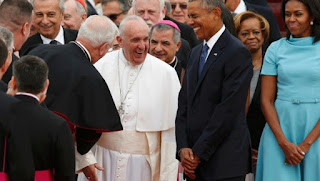 Other commentators rushed into print. John Allen Jr, of Crux, said, "Only time will tell what the significance of this meeting really is, so I'm going to write a long article explaining that nobody knows what it's all about." In the National Catholic Reporter, Michael Winters dashed off a hard-hitting piece demanding an explanation of why the pope had been allowed to meet people without his permission.

Meanwhile, everyone agrees that it was a good move for the pope to have met Kim Davis, the heroine of Kentucky. She was clearly a much more interesting person than Obama, who had spent his entire meeting with the pope in droning on about golf and taking selfies.