Cardinal Dolan and the Inauguration

Should Cardinal Dolan have participated in the inauguration of the new leader of the free world? Let's look at the facts. , 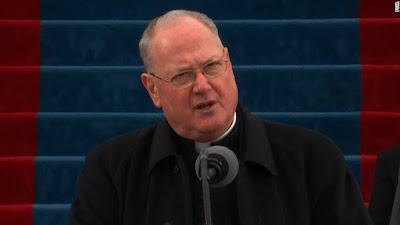 Cardinal Dolan. For once, not eating, not dancing, and not laughing crazily.

After a rather dodgy election, a man was chosen who was considered to be very divisive.

A man known for bad language, some of it foul-mouthed.

A man whose views on sex and marriage are repellent to many Catholics.

A man whose slogans "Make Amoris great again", "Drain the Tiber" and "Let's build a wall to keep the Trads our" are considered to be offensive. 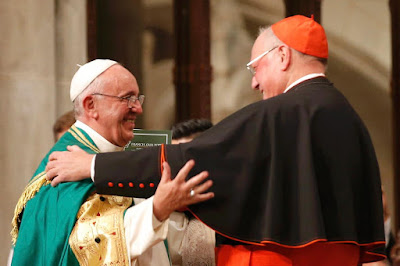 Cardinal Dolan shares a joke with "The Jorge".

Yes, the world is terrified now that the Vatican's nuclear codes are in the hands of such a man. Still, we think that Dolan was right to participate back in 2013, for after all did our Lord not associate with Republicans and sinners?

And, all things considered, the pope's inauguration went very well. A few cars set on fire, and a few bricks thrown through the windows of Starbucks by supporters of rival cardinals, but - on the whole - a good time was had by all. Some pathetic celebrities refused to sing and dance at the party afterwards, but the Catholic Tabernacle Choir, the Rockettes, the Jesuit Female Impersonators and the winner of Vatican's Got Talent (Antonio Spadaro and his sockpuppet show) nobly stepped into the breach. 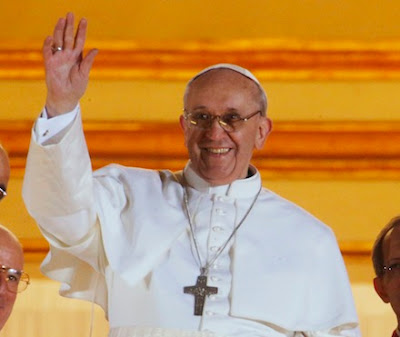 It's time to party, folks!

Still, we are worried that Cardinal Dolan did not even once mention the Spirit of Vatican II in his Bible reading.