In a landmark decision, the European Court of Human Rights has ruled that priests will still be allowed to wear symbols of their faith in church, except when they are banned on Health and Safety grounds. On the other hand, priests will be forbidden from preaching any controversial religious doctrines, such as the existence of Good and Evil. 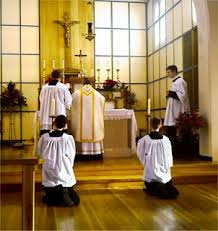 How many Health and Safety violations can you count?

In the picture above, several Health and Safety violations were noted. In future, the priest and servers will be required to wear flame-proof clothing if they wish to continue to use lighted candles in the church. It will also be necessary to have a fire extinguisher prominently displayed on the altar. Moreover, the crucifix at the east end of the church must be removed, in case it falls on someone. 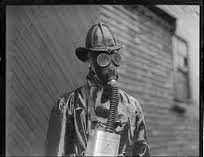 Approved vestments for priests, in cases where incense levels are dangerously high.

Some people have argued that forcing a priest to wear a gas mask while preaching may make his words totally inaudible. This, however, is not normally considered to be a disadvantage. Holy Water is also banned on Health and Safety grounds, as it is known to cause severe burning to demons, devils and liberal Catholics.

Following the ECHR rulings, anyone now has the human right to object should the priest attempt to utter controversial religious doctrines, even in his own church. This includes vicious bullying statements such as "You know, marriage is really supposed to be between a man and a woman, not three men and an elephant" or "Alas, we don't have the facilities for conducting a special Mass for Catholics who like being handcuffed to the bed and slapped with wet fish." 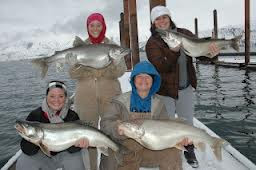 On our way to Mass.

In a landmark piece of opportunism, David Cameron today said, "I am proud that our government has preserved the right of priests to wear religious symbols in church; this is what Conservatism is all about."