Today has seen great rejoicing in the Catholic Church worldwide, as we remember the second anniversary of the drowning of the heathen idol Pachamama in the Tiber. 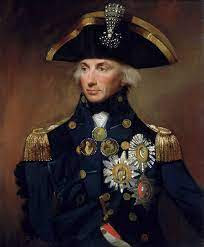 Baron Alexander von Tschugguel zu Tramin, who sank the Pachamama Fleet. It was October 21st 1805 2019 when it became clear that Christian civilization was being menaced by the godless forces of the Francis Revolution and that a major battle was inevitable. So Admiral Lord Tschugguel sailed his fleet to Santa Maria in Traspontina, overcame the army of Pachamama under Admiral "le nain" Ivereigh, captured their primitive idols, and sank them. From then onwards Emperor Napoglio struggled to control his church, although he made valiant attempts to dominate the world with tyrannical decrees such as Tradition est Coupée and a plague of demented synods. He frequently employed the motto "L'église, c'est moi!" but his days were numbered, although it took ten long years of strife before he met his Waterloo. After one last battle, Napoglio was finally deposed and exiled to St Helena. The monarchy was restored in the form of Le Roi Sarah.

Napoglio pines for his Pachamama dolls.
Posted by Eccles at 20:11