How to write your own Dubia

This is the latest in our "How to be a good Pope" series, principally intended for those of our readers who one day will get a nudge in the ribs and a cheerful cry of "You did it, Mussolini! Go out and dictate!" Yes, apparently friends call you Mussolini, but you have never understood why. The story so far: after eight years, you have decided to kick your predecessor Pope Benedictus in the teeth by scribbling off an apostolic letter "Trads are Cussed" which will severely restrict the out-of-date rigid Latin Mass on the grounds that it is divisive because it doesn't stop every ten minutes to say how wonderful Vatican II was. In fact most of the bishops ignored TC, probably because they knew you had made up the results of the questionnaire on which you based it. Nevertheless, a lot of people are very cross about "Trads Cussed", and even your attack poodles such as top biographer Jane Austen Ivereigh (author of "Pride and Prejudice - a biography of Pope Fred") aren't managing to win the argument. What is to be done? Cardinal Sally has left the Congregation of Divine Worship, and, using a theological principle known as "Buggins's Turn", you have given the job to Uncle Arthur Roach, his former deputy, even though he's obviously a complete goon. But how to proceed? You can't just write a sequel - Trads Cussed 2 - as people will just think you were too feeble to get it right first time. 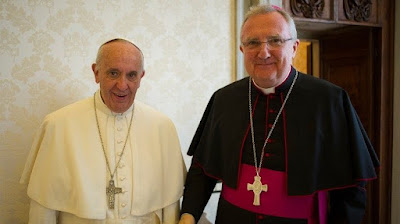 "Shall I send a DVD to all TLM parishes?" asks Uncle Arthur. "That's what we did in Leeds." But then you have an idea! About five years ago, four cardinals sent you a list of five "Dubia" with the idea of clarifying your previous apostolic exhortation "Amorous Letitia", all about the life and times of a woman of easy virtue who sorted out her problems by "discernment" and "accompaniment". Of course you never got round to answering them, because the St Wormwood Mafia who appointed you said it was better not to. But you get the idea? Let's make up some Dubia and answers, which do not actually clarify "Trads Cussed" but turn the screw a few more notches. Uncle Arthur, although a jolly chap especially when he's full of cake, doesn't quite understand the idea, and his first few suggestions were: Dubium: Are we pleased that Cardinal Burke is well again? NEGATIVE.
Dubium: Should Uncle Arthur be made a cardinal? AFFIRMATIVE.
Dubium: More tea, Fred? NEGATIVE.

Amazingly, there really is a Dubia Roach. See Wikipedia. Actually, life is a bit embarrassing for you at the moment, as you accidentally praised the New Ways Ministry, which has already been condemned by the Congregation for the Doctrine of the Faith. You are expecting Ladaria's Spanish Inquisition to drop in any minute. 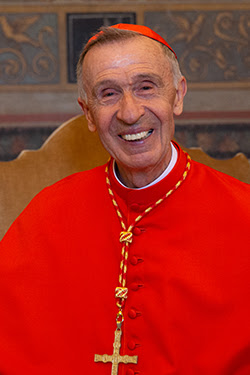 "Oh, hello. My main weapon is fear. Fear and surprise. Two main weapons." Also, people started laughing at you when you came up with the slogan "No more Mr Nice Guy!". Still, when it's translated into Latin it will replace your papal motto "Miserando atque eligendo" ("lowly but chosen") as a more accurate description of your rule. So you knuckle down and make up some more Dubia. Things like "Should Catholics be excommunicated if they tell others that a TLM is going on? YES - KILL KILL KILL - I'm sorry, I mean - AFFIRMATIVE." Or "Are priests allowed to use the same missal twice in one day? NO - SERVE THE BLIGHTERS RIGHT - I mean - NEGATIVE." It doesn't matter how silly the questions are (none that a real Catholic would ask, although maybe your ultramontanist friends at the "Where Pacha Is" blog would be crazy enough), the answers should sting. Never mind that last time "Trads Cussed" was criticised by Kim Jong-un for going too far - it's time to go further! And if anyone mentions Dubia, you don't need to change the subject any longer.
Posted by Eccles at 13:56