Fatman and Martin the Boy Wonder 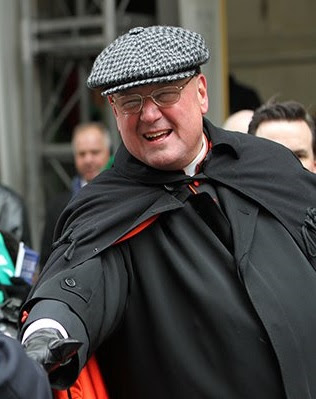 Over to Dolan Manor, just behind St Patrick's Cathedral in New York, where millionaire socialite Timothy Dolan is settling down to a light snack of lobster thermidor aux crevettes with a Mornay sauce, garnished with truffle pâté, brandy and a fried egg on top, and spam. His protégé, Jimmy, is using his "Boy's Own Engineering Set" to build a bridge, and painting it in rainbow colours to match the leotard he is wearing.

The phone rings, and Alfred the Butler (any suggestions?) answers it.

Alfred (nonplussed): The Riddler to speak to you on the Fatphone, sir.

Riddler: Here's a good one for you, Fatman! What do you call someone who promotes abortion, but who is still regarded as being of good standing in the Catholic Church? Ha, ha, ha, ha, ha!

Dolan: He's rung off. Quick - to the Fatcave! Maybe the Fatcomputer can help with this one. 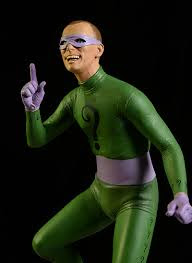 Fatman's arch-enemy has a riddle for him!

In a flash, Dolan puts on his robes and becomes Fatman! Likewise, Jimmy is now Martin the Boy Wonder! They slide down a specially toughened pole, and arrive in the Fatcave!

Fatman: There's a message on the Fatcomputer, Boy Wonder! It says that Governor Cuomo of Godless City has signed a new abortion law. Also I've got 50 people on Twitter asking me why I don't excommunicate him!

Martin: What? And make yourself unpopular? Think of all those parties and dinners you'd miss if you started standing up for Catholic values! Play your cards right, and my friend Stephen Colbert will invite you on his show.

Fatman: Exactly. Well I'll just block these troublemakers on Twitter. Hmm, one's called Eccles. I wonder who that is?

Martin: Look! Here's some real crime, Fatman! A Covington schoolboy has been seen aggressively standing silently wearing a red MAGA hat, while national hero Big Chief Flaming Pants Magua was quietly banging a drum in his face. Magua says "I wanted to scalp um, but he wear red hat. Me, big national Vietnam hero, fire many arrows at Vietcong when only 5 years old." 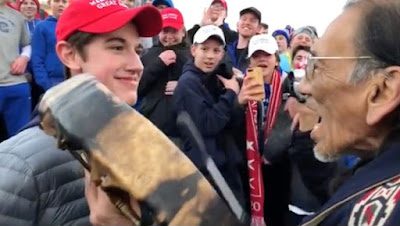 Excommunicate him for smirking!

Martin: Can we excommunicate him, Fatman? Please, please, please! Bishop John Stowe says that it was Hitler who invented the red hat, and nobody wearing one can possibly be pro-life.

Fatman: Oh, we really shouldn't get involved, Boy Wonder. So, back to the Fatkitchen now! I'm hungry! 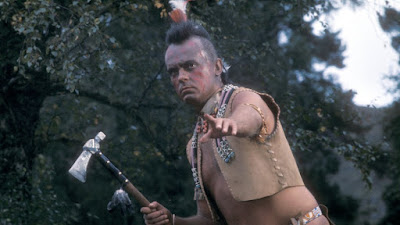