The good kind people of The Pillar have reported on misconduct by Mgr Jeffrey Burrill, former general secretary of the U.S. bishops' conference, which was identified by Grindr data correlated to his mobile phone showing that he had visited various unsavoury places (and I am not referring to Cardinal Coccopalmerio's parties). Our own hackers have constructed some data tracking the movements of a certain Jesuit priest. This has been forwarded to Pope Francis, who will take action some day, no doubt. Meanwhile, here is what we produced. 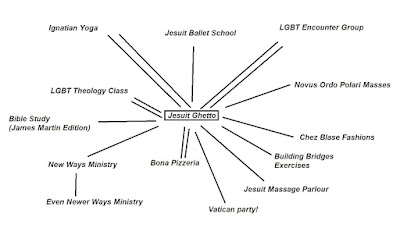 Map of Fr Anon's movements (click to enlarge).
Posted by Eccles at 16:59