Continued from Chapter 17 1. After the departure of Matthew of Hanoch, Bosis gave his servant Sajidiah the task of healing all the sick in the land of Bri-tain. 2. And Sajidiah continued with Matthew's plan, and announced that there would be a day called Free Dom. 3. For this was to celebrate the freeing of Dominus Vobis Cummings, formerly a trusted adviser to Bo-sis, who had been imprisoned in the castles of Barnard after losing the favour of Bosis. 4. So Dominus was released, and he devoted his life to explaining how all those who had ever worked for Bosis were untrustorthy and dishonest. Except himself. 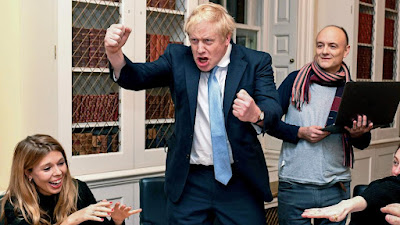 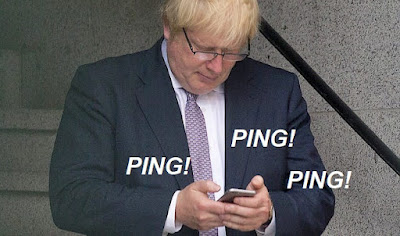 Bosis's Phone speaketh to him. 9. And Bosis spake out saying "That way PING! we shall know PING! who is to be PING! locked up until their PING! ping stoppeth. But not me of course." 10. But the people were very angry and cried with one voice "PING! Bosis too must be locked PING! up." And it was so. 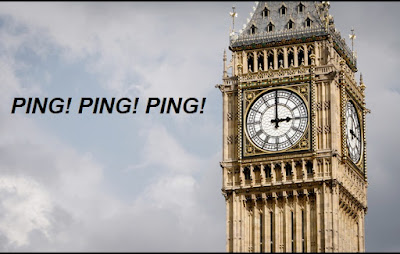 Benjamin the Great hath been near to a plague victim. 11. Now, after the Free Dom day, many new rights were given to the people. 12. They need not wear masks on omnibuses, in the markets, nor when eating or consuming drink. Unless they were told to. 13. Finally, Bosis recalled his solemn promise that, although he wanted everyone to take the great vixen that cureth all ills, he would permit those who did not wish it to refuse it. 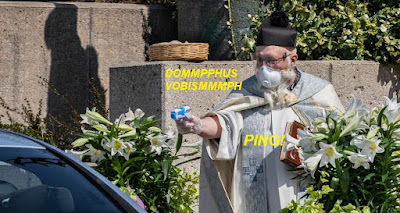 A priest blesseth his flock. 14. So he decided that all men should receive Vixen Passports, without which they could not buy food or clothing, attend the theatres, or worship in the temples. 15. "Thus I have PING! kept my promise," said he. "Now, how do I PING! silence my Phone?" Continued in Chapter 19.
Posted by Eccles at 14:02