How to be a shy pope

We have already seen several pieces on "How to be a good pope", designed especially for those readers who may one day be slapped in the face and told "Hey, you've been elected pope! Come on, sober up, get this white coat on, and step out onto the balcony!" But you may say, "I am too shy to be pope." There are certainly precedents for this.

The problems of a shy pope. One very notable shy pope was John-Paul I, who refused to do anything that might draw attention to himself. No interfering with forms of worship, no heretical encyclicals, not even a spot of idol-worship. Indeed, he was so shy that he decided that the best thing to do was to die quickly. Now we don't recommend this route. Let's say that you are elected at the age of 76 (if you are from the Philippines and good at liturgical dancing you may make it sooner), so you probably have about 20 years more to get through. You may, if very shy, retire early and spend your declining years in prayer and beer-drinking, but let's suppose you have at least 10 years of active popery. 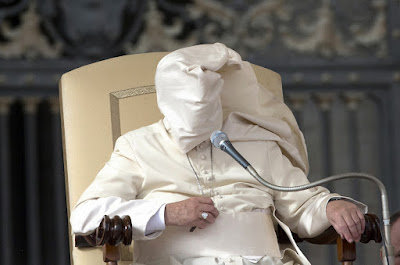 One way to deal with shyness, but don't do it too often. No banging on the table, then! Although you may shyly slap the occasional pilgrim. But that doesn't mean you can't, shyly, make changes of your own. For example, say that you want to forbid the Lord's Prayer, as being something that irritates you. Explain timidly that it is divisive - schismatic, if you like - and certainly against the Spirit of Vatican II. Leave it to the bishops to prevent use of the Lord's Prayer: then the faithful will blame THEM and not YOU. Oh, but I forgot - do praise that predecessor of yours who first allowed use of the Lord's Prayer - probably, St Peter in this case - but explain that it was time to "review" its use. To take another example. Suppose that you have a passion for the Mexican God Huitzilopochtli, the recipient of many human sacrifices from the Aztecs. Then you can be photographed absent-mindedly attending such a human sacrifice (perhaps as part of a synod): by now some stooge will have written a biography of you, Fred - the shy pope, and he can be relied upon to explain to the faithful that the Huitzilopochtli statues actually represent a Catholic saint - let's say, St Joseph - and that the tearaway Austrian who threw some into the Tiber was definitely a fascist. 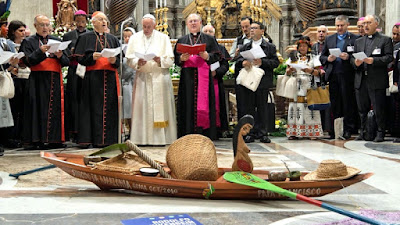 "He's very shy you know. Too humble to complain about this." One final example. It is part of the job description for a pope that he should churn out the odd encyclical or apostolic exhortation. You may not be very good at this, and will no doubt include the odd dozen errors - heresies, that sort of thing. Some cheeky cardinals are likely to notice and send you Dubia (a Latin word meaning "Are you crazy?") It would be very embarrassing for a shy pope to get into a theological debate, but all you have to do is ignore them. Again your closest pals will explain how wicked the cheeky cardinals are... not proper Catholics you know... responsible for climate change... not sympathetic to Fr Martin James your LGBT friend... Meanwhile, you sit shyly in the corner reading a novel.
Posted by Eccles at 11:14