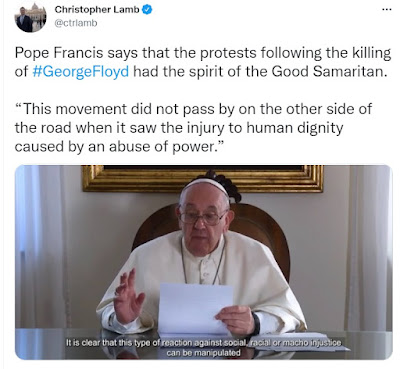 Our star reporter Lambchop breaks the news. We are grateful to Pope Francis, the celebrated climatologist, left-wing political agitator and part-time Catholic, for correcting the account in St Luke of the activities of the Good Samaritan ("Sam" to his friends). It seems that this well-known parable did not turn out exactly as reported by St Luke, and - like the Beatitudes, the Lord's Prayer and other Biblical errors - it required updating. Count your blessings that this was done by papal decree, and not another synod! It seems that, after delivering the mugging victim to the inn, and binding up his wounds, Sam reacted in the only proper way. He embarked on a campaign of violence, setting fire to buildings, attacking random people who had nothing to do with the muggers, looting shoe shops (medieval paintings often show the Good Samaritan dressed in a pair of brand new Adidas trainers), and generally harassing anyone who got in his way. 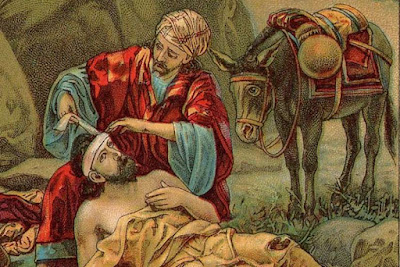 "My mates and I will get them for this. And anyone else within 50 miles." Other prominent figures from Jesus's parables also turn out to have led complicated lives. The man with the lost sheep, having found the poor animal, then went round to his neighbour's farms and set fire to their barns. The prodigal son, offered some fatted calf by his long-suffering father, accused him of letting his animals cause climate change, with the immortal words "You have stolen my childhood and your dreams." Lazarus, in Abraham's bosom, mocked Dives as a "self-absorbed promethean neo-pelagian." The sower who was sowing seed, once he had finally worked out where the good soil was, ripped it up and threw it in the face of passers-by as a way of showing that he was a true custodian of tradition. Then he screamed at them because they were cross with him. We are looking forward to Pope Francis's new encyclical Parabolae Perditae or Parables Lost, which will correct and re-interpret all the Biblical parables.
Posted by Eccles at 14:16