The Climate ChangeTM world is reeling in horror today with the news that Pope Francis will not be attending November's prestigious COP26 conference in Glasgow. In his place, he will be sending Vice-Pope Parolin, with various useful bits of advice such as "A Glasgow kiss is a head-butt, Pietro, so don't ask for one in Mass just before the Agnus Dei" and "Deep-fried Mars Bars are so disgusting that only Cardinal Dolan will eat them." Naturally, there has been speculation about the Pope's reasons for crying off. Was it when he heard that Climate ChangeTM had not actually reached Glasgow and the weather in November will be (in the local vernacular) "cald enow ta freeze the haggis off a poop, ya ken"? 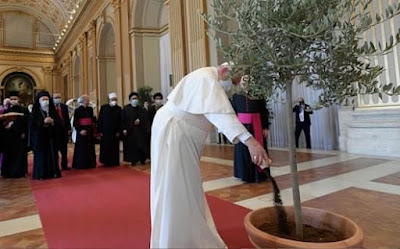 Pope Francis shows an admiring audience how to save Mother Earth. The Holy Father had already explained that he was attending in a purely secular capacity, and would not be creating any Scottish saints, attending Masses (och aye, use of the Scottish vernacular would have been a good way to prove its superiority over Latin, the noo), or even handing out Pachamama dolls. As a purely secular pope, he would have been attending as Jorge Mario Bergoglio (Vatican State), wearing a simple business suit made from the wool of low-carbon Argentinian llamas. But it was not to be. Another theory to explain the Pope's absence is his well-known fear of St Greta of Thunberg. After her moving speech to the Swedish toddler group this week, where the words "blah blah blah" led to riotous applause, Pope Francis is naturally nervous in case she accuses him of stealing her dreams and childhood or describes his finely-crafted empty words as "blah blah blah". As he explains, "I've been getting enough of that sort of language from the Catholic Church ever since I decided to kick the TLM brigade in the teeth." 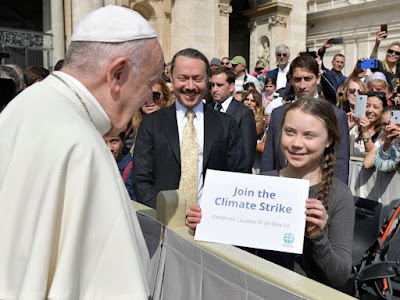 Greta is not the first person to wish that the pope would go on strike. Well, so be it. COP26 will have to survive with Parolin, and without the pope jetting in we must expect Mother Earth to die just a little bit sooner. As St Greta puts it "HOW DARE YOU?"
Posted by Eccles at 17:23