Rome, AD 66 (approx.) St Luke, Reporter for EWTN, writes: 1. O Theophilus, it is indeed wearisome to write my words in numbered verses, but as you know, all writers of this day and age are doing so, and I shall not rebel. 2. It came to pass that Pope Peter and the Emperor Nero met in Rome, and spent five and seventy minutes together. Nero dozed for sixty minutes, and they spake for fifteen. 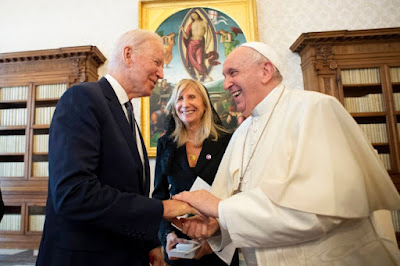 Where Peter is. And Nero. 3. Alas, I was not permitted to be present, and no official account of the meeting was released, so we cannot be sure what was said. 4. However, the Emperor Nero Josephus Robinetticus Bidenicus hath given some account of his words with Pope Peter, and no man dareth doubt their truth. 5. After greeting Peter, and sniffing his hair, Nero discussed weighty matters with him, such as his plans for a climate change conference in Pompeii thirteen years hence. 6. According to reports, the question of Nero's morals did not arise: the Great Fire of Rome, at which Nero played the Martius Haugenus anthem "Gather us in" on his lyre, causing terror among the populace, was not mentioned. 7. Likewise, the subsequent burning of Christians did not arise as a question that needed to be discussed.

"Build Back Better." In this picture we see a notorious lyre. 8. However, in the words of Nero himself, whom all must believe: "Pope Peter told me that I was a good Catholic, and that I should keep receiving Communion." 9. Indeed it is true that Peter's Letter to the Amoral Laetitians hath said that mass murder should not be a bar to receiving the Lord. 10. All we can say is that, following his meeting with Pope Peter, the President Nero hath redoubled his persecution of Christians, Chinese, Afghans, babies, etc. etc. 11. Indeed, Peter himself hath been crucified, Paul is on the "wanted" list, and I too am in deep trouble. Written from the Catacombs.
Posted by Eccles at 12:01