Who would call the pope a heretic?

With apologies to Sir Arthur Conan Doyle. "But, Holmes, why should anyone shout 'Pope, you are a heretic!' at Pope Francis?" I asked the great detective. "A very good question, Watson" replied my friend, strumming a few bars of "Mary, did you know?" on his Becciu fiddle ("it prefers used notes"). 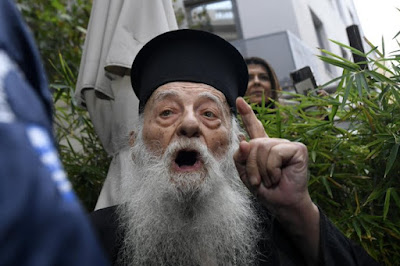 "Πάπα, είσαι αιρετικός." I refer, of course, to the scandalous events of December xxxx, when Pope Francis made a journey to Greece. Initially the Athenians were very disappointed, complaining "The Thessalonians and Corinthians got St Paul, but all we get is Pope Francis." Still, his minders assured the Greeks that soon Francis would be a saint, and probably regarded even more highly than Paul, since he spent so much time correcting him. "It could, of course, be that old chestnut about Filioque" I suggested. "But surely nobody really gets excited about this nowadays? We're all expecting Francis to rewrite the creed soon, anyway, to include something about Mohammed, Luther, Henry VIII, and the Spirit of Vatican II." "No, Watson," replied my friend. "But have you thought that the very hairy man could be a Catholic in disguise? Alexander Tschugguel, maybe? Or Father Z? Perhaps Dr Joseph Shaw? Even Cardinal Burke?" I stared at the photograph of the generously-bearded man, but could not recognise anyone I knew. I also had other doubts. 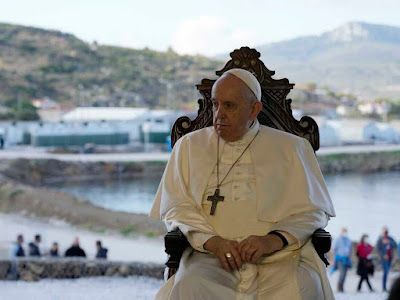 Pope Francis will write an epistle to the Lesbians, on the advice of Fr James Martin SJ. "But why would a Catholic want to call the pope a heretic?" I demanded. "Francis leads a very 'orthodox' life, as far as I know. His Amoris Laetitia is admired worldwide as a totally new approach to morality; his collection of Pachamama idols has enriched Catholic worship immeasurably; his changes to the Lord's Prayer have made it much more friendly." "It is strange, indeed," agreed Holmes. "Indeed his Traditionis Custodes has brought joy to so many people - or at least to the ones who really matter. One might say that he is the most popular pope since the Borgialios, er, Borgias." "Could the bearded man be Austen Ivereigh?" I suggested. "Trying to get some more material for his nineteenth book about Pope Francis? Since everyone in the Catholic Church - even the bishops - has now decided to ignore everything Francis says, the little scribbler must be running out of exciting material." Holmes looked at me with amazement. "Watson, my friend!" he exclaimed. "Sometimes you surprise me!" Not to be continued.
Posted by Eccles at 18:05