Why don't I hate Ian Paisley?

Ian Paisley, alias Lord Bannside, is dead, and I feel very guilty. Look, I know it was my Christian duty to hate him, and now I should be opening the champagne, dancing around, and writing a blog post saying that the old bastard is no doubt going straight to the Lake of Fire, but... actually I don't feel that way.

True, he had a slightly Protestant view of religion - just as you might say that Richard Dawkins has a slightly atheist view of religion - and, like Dawkins, he said some horrible things, many of which were rather stupid. For example, he thought the popes were the Anti-Christ, although it's not clear to me whether he would have included St Peter in that number. 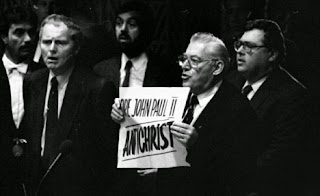 Ian waits at the airport for the Pope (and/or the Anti-Christ) to collect his baggage.

Yes, this is worrying. I ought to be thinking nasty thoughts about Paisley and they just won't come. Probably he's in some queue for Purgatory now with Donald Sinden the actor, who has also died, each trying to shout louder than the other. Luckily, Brian Blessed shows no signs of joining them today. 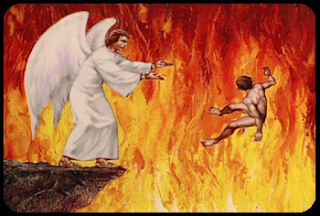 The Lake of Fire. Some people end up here (not readers of this blog, obviously).

If it wasn't that he had many of the same religious opinions, my big brother Bosco would even now be condemning Paisley to the Lake of Fire.

Look, I'm trying to think nasty thoughts about the Reverend Ian Paisley (or RIP, as everyone is calling him today), but they're not coming. I had the same problem when the comedian Bernard Manning died. The man said unspeakable things, but he wasn't just plain evil in the same way as Hitler, Stalin, and the rest of them. 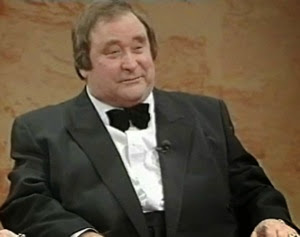 Probably you should shout "Yah, boo" at this photo of Bernard Manning.

Admittedly, nobody is claiming that Ian Paisley was a saint, in the same way as St Francis or St Thérèse of Lisieux. Actually, these days, when asked to think of a saintly character, people name Gandhi or Mandela instead: this proves that the era of satire is dead. Still, Paisley may be slightly saved, in spite of all his obvious nastiness.

No, I really don't find it in me to spit on his grave. Sorry. Perhaps if I pray a bit more, I will be able to summon up more hatred... 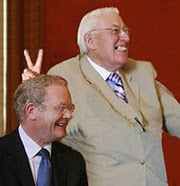 Devil horns or rabbit ears? RIP shares a joke with a friend.