The Franciscan Friars of the Filthy

We were privileged to be invited to talk to Fr Sid Polecat, superior of the order Congregatio Fratrum Franciscanorum Spurcae, the Franciscan Friars of the Filthy (FFF). Its sister organization, the Franciscan Friars of the Immaculate, has been placed under restraint from on high - a moratorium on ordinations, restrictions on EF Mass, exile of some of its members, Fr Fidenzio Vulpine peering through the window and making faces at them, etc. However, in contrast, the FFF has received a papal gold star for good conduct. 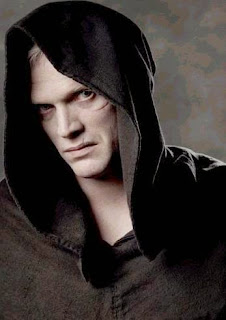 The FFF cannot in any way be described as a traditionalist group. Unusually for monks, they are a mixed order, with each cell being occupied by one man and one woman; well, some may be occupied by two men, but who am I to judge? In line with the Spirit of Vatican II, their worship consists of the Novissimus Ordo, a form of the Mass which has been specially translated so as to eliminate all references to God, Jesus, Sin, Hell and Confession, let alone those words which so many Tablet readers find difficult such as Consubstantial and Communion. In place of the homily, their Mass features a fifteen-minute excerpt from an improving video, such as Fifty Shades of Grey or Game of Thrones. 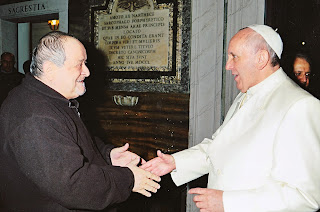 Fr Vulpine reassures the Pope that the FFF is as modern as possible.

Unlike modern translations of the liturgy, which unaccountably fail to mention clowns, puppets, liturgical can-cans, and the Grope of Peace - all introduced on an ad hoc basis by more progressive priests - the FFF's own liturgy has these as compulsory parts of the service. Since the Kyrie, Gloria, Credo, etc. were removed there is plenty of space for praising God (or at least Man) in these ways.

In line with their "filthy" label, the FFF spend their afternoons in muddy sports, such as pig-wrestling, Rugby football or jumping into heaps of manure; it was suggested that afterwards they might retire to the mixed baths in order to recapture the spirituality of the Garden of Eden, but in fact the monks and nuns prefer to keep God's Good Soil (or possibly Good Dung) close to their bodies. 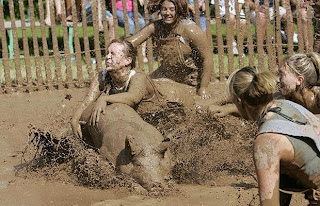 A group of spiritual nuns grapples with a pig.

Father Polecat, whose cell is decorated with pictures of his spiritual idols - I noticed Bugnini, Martini, Harriet Harman and Hillary Clinton - is optimistic about the future of the order. "Spiritually-inclined young people, many of whom naturally reject conventional Catholicism as being too focused on Christ, often discover that lounging around, wallowing in mud, and refusing to repress their normal lusts and desires is a very attractive lifestyle. Fortunately, we have friends in high places who agree." Certainly nobody would describe them as self-absorbed Promethean neo-Pelagians, and this may be the key to their success!