One of the country's twelve most senior clergy, Apostle Judas Isconry, today declared himself "relieved" that his secret was finally out. For months he had been "having a relation" with the chief priests, and in the end the fact that he had sold out for thirty pieces of silver became only too clear. After Jesus had been betrayed by Judas, He staged a surprise comeback, and promptly went to the Daily Mail (editor: St Matthew the Evangelist), which duly printed the whole story. However, Isconry insists that he is not resigning over his affair with the chief priests, but over an earlier relationship (believed to involve a man with horns and cloven hooves). 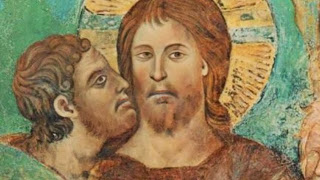 Bishop Isconry has now resigned his position as apostle, and his future is very uncertain. Said his senior colleague, St Peter, "Who are we to judge? The bastard betrays Christ, thinks of nothing but his own personal desires, and has caused untold distress to the folk for whom he was supposed to be a spiritual father. Give him a break!"

The Bishop himself was at pains to stress that he had at no time shown hypocrisy by preaching against the world, the flesh and the Devil. Indeed, many people, hearing his words, had wondered whether he was really an apostle at all. Moreover, he did not encourage Confession, for if he'd gone to Confession himself, it would have given the whole game away. 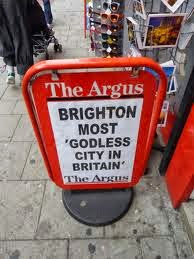 The fruits of Bishop Isconry's ministry.

The big question now is "How much did the other apostles know?" Could the Apostle Cormac himself really not have known about Judas's double life? Was the "Protect the Messiah" blog suppressed by the Archangel Michael because its author persisted in revealing embarrassing truths? Why did St Damian the Spectator not bother to investigate when he heard rumours about Judas - was it because they were not yet officially confirmed by Twitter? Does St Catherine the Popehater really think that an adherence to traditional rules is at the root of the problem? Indeed, should apostles be allowed to take wives - other people's wives, that is? Well this is all very sordid, so let's finish with a charming picture of a saint. 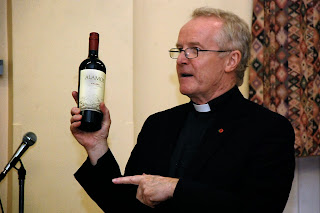 St Kieran the contrite says "I like a wine with body..."

On an unrelated matter a reader, Mr Hilaire Belloc, writes:

Sorry, ran out of ideas at this point. The plan was that he would become a bishop and get involved in an adulterous affair. But nobody would believe it, would they? H.B. 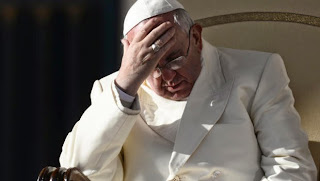 Pope Francis hears how well the English bishops are performing.