Pope Francis's tour of the South American countries of Ecumania, Bolshevia and Paradoxia continues to be a great success, and reinforces the important role of Latin - or at least Latin America - in the Catholic Church. Everywhere he goes he is welcomed with generous gifts, although some of them may be considered inappropriate. 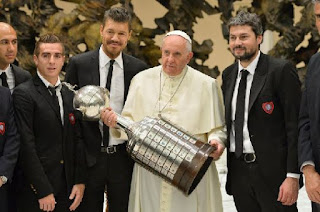 A nerve gas canister for the pope!

In Ecumania the pope was presented with a nerve gas canister, guaranteed to emit the finest quality Sarin.

Commentators are divided as to what Pope Francis said on receiving the gift. Some say that he asked "But does it cause climate change?" while others recorded his response as "Just what I need to deal with Cardinal Kasper!" Our Spanish is not good enough to tell the difference.

Elsewhere in Ecumania, the pope was given an Incan "sacrifice knife", stained with the blood of many victims, as a gesture of Incan-Catholic reconciliation. It was not clear whether he intends to use it during the next synod. 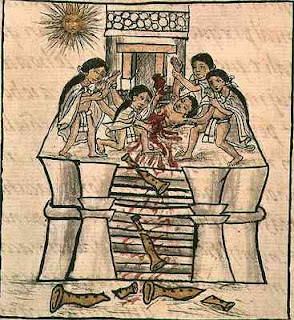 The Spirit of Vat-Inca II.

Strangest of all was what happened in Bolshevia, when President Evo Immorales presented him with a "Bolivian army knife" containing a hammer-and-sickle, a crucifix, and a device for getting stones out of horses' hooves. The pope and the president then burst into a spontaneous rendition of the Monkees' song "Then I saw her face, now I'm a Bolivia." 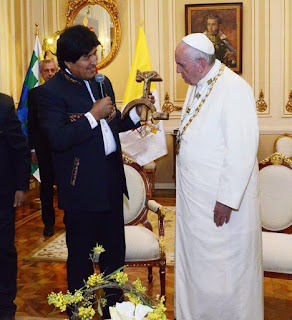 Workers of the world, unite!

We are looking forward to the pope's visit to Paradoxia, where perhaps he will be given some Nazi artefacts to put on his mantelpiece. After all, many Nazis fled to South America at the end of the war, and there is a thriving "Catholics for Hitler" community, which would like to increase its influence in the Church. These days, we are asked to welcome everyone. 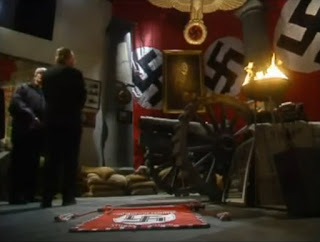 Choosing a present for the pope.