A guide to Britain, part 1

A few weeks ago there was a comment on Father Z's blog, saying that one of its readers found this blog spiritually nourishing - that may not have been the exact terminology used - but didn't often know who we were talking about. So we propose a step-by-step guide to the main religious and anti-religious figures in Britain. With luck you will be able to spot a Tina Beattie at 50 paces, to take cover when you hear a Richard Dawkins ranting, and to understand obscure jokes about druids and Rowan Williams.

The first Englishman is an easy one to identify. 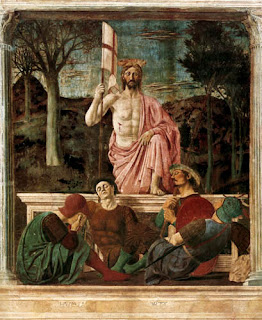 Evidence that Christ is an Englishman.

It's generally agreed that God is an Englishman, and that the original version of the Bible is the King James Bible (later translated into Hebrew, Greek, etc. and hidden in caves in the Middle East). So far, so good. No Americans (etc.) will have any trouble with that one. 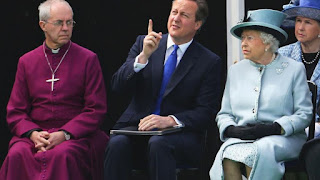 David Cameron explains to the Queen and Archbishop Welby where Heaven is.

Second only to God, as far as many English are concerned, is Her Majesty the Queen, Supreme Governor of the Church of England. Although she is the top spiritual being for Anglicans, many of her most important duties are delegated to the Prime Minister (David Cameron) or the Archbishop of Canterbury (Justin Welby). Note that the Church of England was founded in order that Henry VIII could have six wives - nowadays, this would be called "showing mercy to him" - and it has been a tradition ever since for the British sovereign to have six husbands or wives where possible.

Three of the Queen's six husbands.

The main rival to the Anglican Church is of course the Catholic Church, which kindly supplied most of the beautiful medieval buildings that Anglicans use, leaving the ugly buildings for itself. It currently has one non-retired non-disgraced cardinal in Great Britain, namely Vincent Nichols, Archbishop of Westminster. Now "Vin", as he is affectionately known, has always done his best to reflect the mood of the pope of the time, so much so that he might be a model for the legendary Vicar of Bray. When Pope John-Paul II was reigning, Vin was saintly; when Benedict XVI took over, he became intellectual and orthodox; under Francis he is confusing and rather liberal ("gay masses" etc.) - a worthy companion to Kasper, Baldisseri and Danneels at the forthcoming synod. 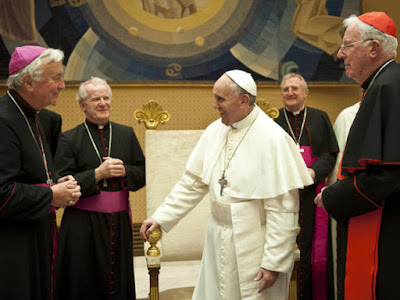 While we're surveying the "Premier League" of religious figures, we cannot forget the World's Greatest Atheist, Professor Richard Dawkins. Variously described as "a genius", "barking mad", "a complete moron", "Dr Bonkers", "gives atheists a bad name", etc., he is a controversial figure, and presumably well-known overseas. Now in retirement, his 24/7 presence on Twitter screaming insults at Catholics and Muslims has not prevented him from producing Volume 2 of his memoirs, called "Brief Candle in the Dark", which I suppose we ought to blog about some time. 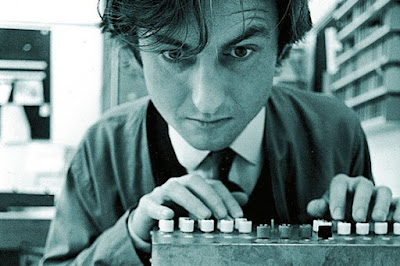 A young Richard Dawkins does something brainy that proves the non-existence of God.