Catholic commentators are expecting some special news today, as Pope Francis steps onto an Air Vatican flight to Milan. You can be sure that everything he says and does will be scrutinised very carefully - is he about to move the Catholic Church towards abortion, divorce and same-sex marriage? Or is he going to stick to Christianity? 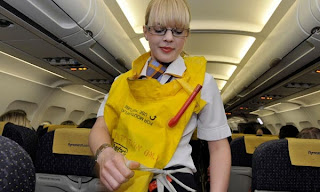 A life-jacket demonstration or a liturgical abuse?

Well, this is very exciting. The Pope has put down his copy of The God Delusion, and is carefully watching the flight attendant demonstrate the use of the life-jackets. Liberal Catholics will surely interpret this attentiveness as a sign that the Holy Father wishes to make a point about the important role that ladies play in the church - surely the ordination of women cannot be far away?

On the other hand, the pope's nihil obstat to the life-jacket demonstration may also be seen as his way of expressing a traditional pro-life attitude.

Have you noticed that Pope Francis is sitting in seat 6A? Now Pope Benedict always used to sit in seat 8F, so that on take-off he had a good view of St Peter's Basilica. Traditionalists will worry that Francis is deliberately distancing himself from Benedict here by choosing to look at a humble power station on take-off. 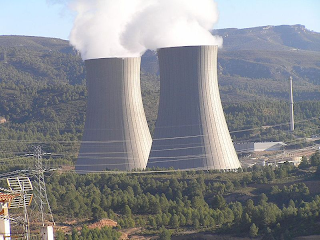 Is the subliminal message: "I have the power now"?

Well, we've taken off, and the Pope has picked up The God Delusion again. He's laughing heartily at it, so we may see that as a sign that he is an orthodox Catholic, after all. Apparently, last time he flew he took God's Mother, Eve's Advocate with him, and had to make use of the sick-bag provided.

The flight attendant's coming round with the trolley now. She's offered Pope Francis a choice of drinks, and we can just hear what he's saying to her ex cathedra: "Coffee, please!" The use of "Coffee" here, rather than the Latin word Coffeum preferred by Pope Pius XII, will come as a shock to many - clearly Francis no longer thinks it appropriate to use Latin in a liturgical context. Has he repealed Summorum pontificum?

Well, after that bombshell, we must see what the Pope chooses to eat. A cheese sandwich or ham? Now there's another shock - he's rejected the Battista Ricotta cheese and chosen the ham instead. This is surely a sign that he means to take seriously those allegations of sexual misconduct at the Vatican Bank. 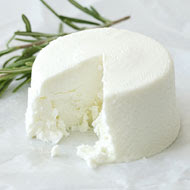 Battista Ricotta - rejected by the Pope.

We note that the Pope has been sitting quietly in his seat during the flight, with his seat-belt attached. Pope John-Paul II used to take his off, and kiss the floor of the aeroplane, but clearly Pope Francis's reign is going to be totally different.

Well, the captain has put on the "seat belts" sign now, and Pope Francis looks up from The God Delusion and smiles at the flight attendant as she takes his coffee cup away. Yes, there's clearly going to be movement on the ordination of women. 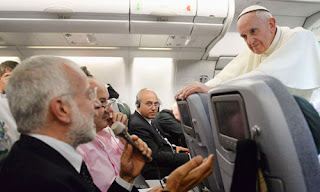 "Could you be quiet? I'm trying to read."