For Catholics at least, Christmas is cancelled this year, after Pope Francis declared that "Christmas is approaching: there will be lights, parties, Christmas trees and nativity scenes… it's all a charade. The world continues to go to war. 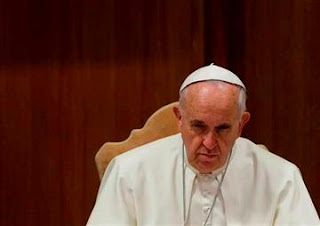 Of course the Holy Father has a point. This is the first time in 2015 (or so) years that the world has not enjoyed peace on earth at the end of the year. Remembering that God sent a Saviour to the world is a bit traddy really, and we should regard Christ as an irrelevance, and worry more about climate change and terrorism.

Pope Francis - always one to practise what he preaches - has decided to omit the usual Christmas Day Mass and Ubi et Orbi blessings. Given that he dislikes so many people he is finding it increasingly hard to issue blessings, anyway. Instead he intends to go into a dark room and sulk meditate - his meditations will later be published as a new encyclical Nolite Laetare or "Stop enjoying yourselves!" 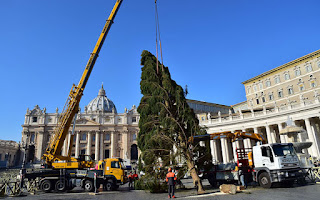 "And you can take away that stupid tree, as well."

Catholics involved in nativity plays over the festive season are asked to rewrite them to avoid all mention of Jesus, but instead to populate with them with earnest left-wing intellectuals making gloomy speeches about war, violence, and bloodshed. "Ho, ho, ho!" But the jolly white-bearded man dressed in red is not welcome this year!

Christmas carols will naturally be rewritten to make them as gloomy as possible, so we expect to hear songs such as: "Ding! Dong! Gloomily on high", "Get lost, all ye faithful", "Aaaaaghhh! The Herald angels sing" and "A plague on merry gentlemen".

So, following Pope Francis, we wish you all a really miserable and gloomy Christmas, and a disastrously painful new year. And take that smile off your faces. 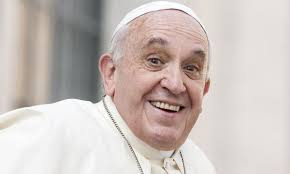