It's not been a good weekend for the Archbishop of Canterbury. Not only has his video nasty "The Lord's Prayer" been banned in cinemas, as already recorded, but he has suddenly been introduced to the notion of sin.

Specifically, he said that the recent terrorist murders in Paris led him to ask God where He was.

It is unusual for a man to reach the rank of archbishop without knowing that there is an inexhaustible well of evil in the world, but it can happen. As His Grace explains, "In the oil industry, where I began my career, there were very few acts of violence, unless you count the great Esso-Shell-Texaco gang warfare of the 1980s. The Church of England, where I am now, is full of people who believe themselves to be totally without sin, and they're probably right. Admittedly, we have this thing called 'General Confession', but it's so vague as to be meaningless. 'Erred and strayed from thy ways like lost sheep'? Doesn't sound too bad, does it?" 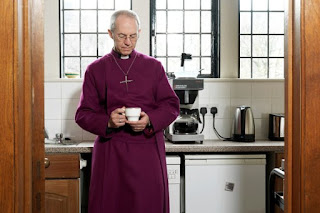 We pointed out to Archbishop Welby that people had been murdering each other ever since the days of Cain and Abel, not to mention the great massacres of the Reformation, and a few (alleged) sinners in the 20th century such as Hitler, Stalin and Mao. "Oh, they must have slipped my mind," he admitted.

We then pointed out that one of the reasons that Jesus came into the world, apart from amusing Himself by turning water into wine and making large quantities of fish sandwiches, was to bear the sins of the world. This struck the archbishop as a brilliantly original theory: "You mean that my whole job is based on the fact that there is evil in the world?" he asked. "Well, well, I never thought of that one. You've really taught me a thing or two, Eccles!" 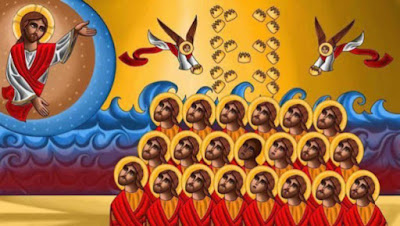 The Archbishop was startled when we told him that Christians were being martyred in the Middle East.

We planned to conclude our little chat with a prayer together, namely, "Our Father", which also mentions sins, but, out of consideration for the feelings of the National Secular Society, we decided not to do anything so controversial.