After a very successful meeting with Rome's Lutheran church, Pope Francis has finally said what many people suspected all along, namely, "I don't really like Catholics." 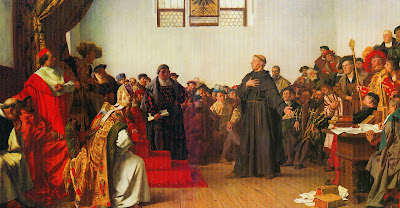 The Diet of Worms. On behalf of all Catholics, an apology for "judging" Martin Luther.

"Of course, I'm not referring to people like my great friend, the intellectual giant, Walter Kasper," he added, "nor to people like Fr Tommy Rosica and Fr Jimmy Martin S.J. Some people don't really think of these as Catholics, anyway. But as for the rest..."

Pouring out his woes to a sympathetic audience of Lutherans, the pope went on to say that practically all Catholics were airport gnostics, leprous neo-Pelagians, existential parrot-Christians, Renaissance functionaries and pepper-faced tourists. "Thank God for Martin Luther," he added. "He certainly put Catholics in their place." 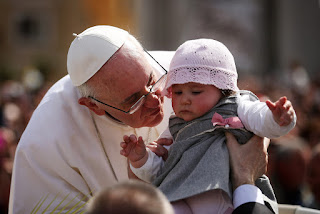 "You little promoter of the poison of immanence!"

"Wait until the Year of Mercy starts," he added. "Those Catholics won't know what hit them! Then, when it ends, we'll be just in time to celebrate the Reformation!"

It is felt that Pope Francis may be disgruntled by the outcome of the recent synod, when he was severely embarrassed by constant references to scripture and tradition. However, as pope, he gets the final word, and is said to be ready to take the Catholic church in new directions, following the lead of the great Martin Luther. 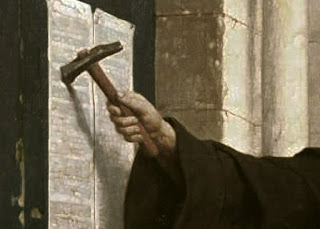 Pope Francis nails his 95 theses to the door of St Peter's.