How to scandalize the Catholic Church

Yes, it's another in our long-running series on "How to be a good pope," designed for those lucky readers who may one day have to decide whether to trade as Pius XIII, Benedict XVII, Francis II, or George-Ringo I. Well, I say lucky. Some people are naturally suited to the position of pope, being holy, meek, pure in spirit, merciful, and an expert at dealing with cardinals who are dodgy financiers or drug-takers. Others, like yourself, got into the job by accident, when your flustered careers adviser ticked the box marked "PAPA" by mistake for "PORTERO" on the sheet of recommended jobs for you. You could have had a great life as a caretaker/janitor, sitting in the entrance to an office-block, smoking, reading the paper, and slapping intruders, but it was not to be. You ended up as Pope, and you only rarely get the chance to slap anyone. 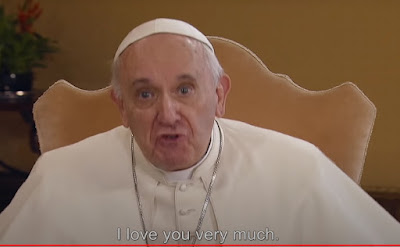 "I love you very much." Well, everyone except Burke, Schneider, Sarah, Viganò... and Donald Trump. Anyway, you're stuck with the job, and you have certain beliefs that can't really be described as "Catholic": Marxism is great, give communion to anyone who wants it, being divorced and remarried is just fine, abortion is nothing to be bothered about, everyone will go to Heaven (or more likely nobody will as you don't believe in it), this Pachamama cult sounds like fun, ... So what do you do? You speak out. Not ex cathedra, since if you tried that be sure that your throne would act as a divine ejector-seat and you would disappear, never to be seen again. No, you can give interviews to 108-year-old journalists known for making things up from memory, you can fraternize with Marxists and abortionists - after all Jesus also met sinners, and perhaps He too used to slap them on the back and say "You're doing a grand job, carry on!" You can write encyclicals and apostolic exhortations, and people will just nod wisely and say "It's OK, it's just the Pope's personal opinion" and tap their heads significantly. It's rather disappointing really, you were hoping to hit the headlines worldwide. But one day you get to release a video on which you're talking about homosexual relationships and all Hell breaks loose (if you'll pardon the expression). 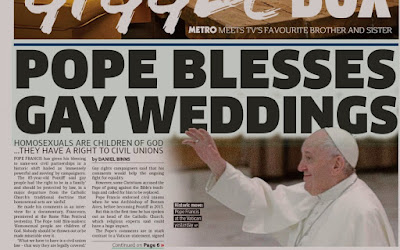 At last! The publicity you've always wanted! What's the problem with civil unions for homosexual couples, you wonder. One of your favourite Catholics, Joe Biden (who, like you, doesn't believe much of that Christianity stuff) actually "married" two men at his home in Delaware. Joe is a Good Catholic, but for you his main attraction is that he hates Donald Trump nearly as much as you do. I forgot to mention that en route to becoming Pope you became a Jesuit: so you know the funny handshakes, and you were trained in the ancient Jesuit art of Mumbo Jumbo - saying things that can be intepreted in more than one way. Your friend and mentor Fr James Martin LGBTSJ gave you the Martin translation of the Bible. In it you found the following text, where all was made clear: 1. So Lot said, "O Lord, what can I do to stop you destroying the Cities of the Plain?" 2. And the Lord God answered, "Tell them to introduce a programme of civil partnerships in order to regularize their relationships." 3. And it was so. The text goes on to say how Sodom and Gomorrah became known worldwide as a centre where gay couples could meet and practise Ignatian yoga. 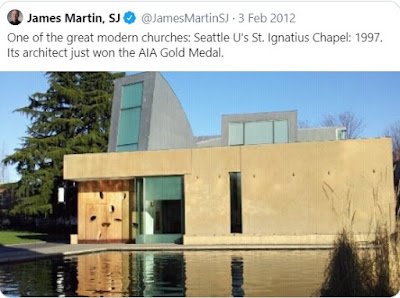 Modelled on one of the gay bath-houses in the Cities of the Plain. How did you get into this situation? Well, curiously, it was all Parolin's fault. He came to you, saying, "You know that dodgy deal we've got with China, where they are allowed to appoint their own bishops and torture all the Catholics? Well, we're about to renew it. How can we bury the news?" "Hold my Boese Lager, Pietro, I think I know how to grab a few headlines..." The rest is history. The Pope changes Catholic teaching. Jesus, the apostles, doctors of the Church, and 265 previous popes got it all wrong. "Can priests get into civil unions now? Asking for a friend, you understand," says Fr Jim. Oh dear, don't you wish you were a simple janitor? 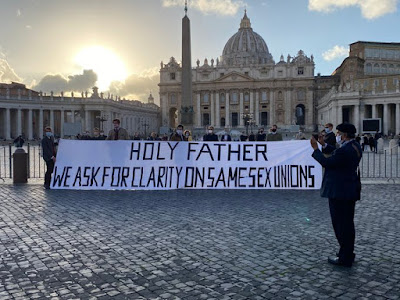 And now Alexander Tschugguel demands clarity - the one thing you must never ask of a Jesuit!
Posted by Eccles at 17:20