Your Holiness,
Many of us are very pleased to see you on Twitter, but I think it's time that some friendly person took you aside to explain that you're not really using it properly. 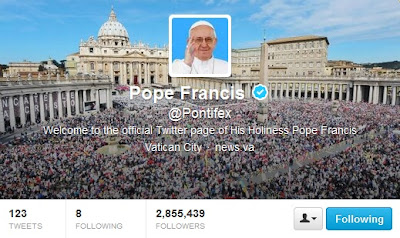 You see the problem here? You are following only 8 people, and they have very similar names, for example, Papa Franciscus, Pape François and البابا فرنسيس. If you are going to use sockpopes, you ought to make them less obvious, Holy Father, and conceal them by following lots of other people as well as yourself. Call yourself something more subtle such as "Geo. Bergoglio", or "Anonymous Holy Man", or perhaps "Vatican Big Cheese", or even just "Happy Catholic". All the names that cry out "I'm holy, and don't you forget it!" such as "Miser Peccator", "Holy Smoke", or "On the side of the angels" have probably been taken already, I'm afraid.

Now, you may think that 2-million-plus followers is something special (after all, Dawkins has less than 800,000 and Justin Welby a pathetic 40,000), but even the Dalai Lama's stuff is read by over 7 million fans; when you leave the realms of religion and go into show-business, you find Justin Bieber, Katy Perry, Lady Gaga and Barack Obama all around the 40 million mark. And Obama can't even sing. 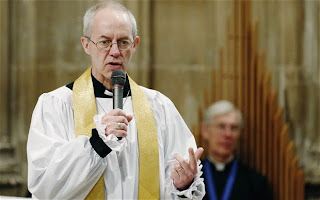 Justin Bieber Welby. The one who sings, anyway.

So what are you doing wrong, your holiness? Well, take your latest tweet: We cannot be Christians part-time. If Christ is at the center of our lives, he is present in all that we do. You're using U.S. English, very good; that will bring in our American friends. A very sound comment, but it does read a little too much as if you're trying to preach to us. When did you last crack a joke? Or post a funny picture? 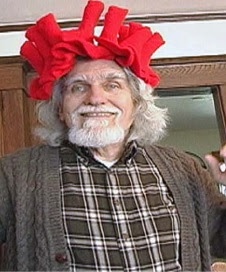 This man thinks he's a cardinal, but he's just a lunatic. ROFL. Love you all. @pontifex

Yes, that's the sort of thing. Now you should really be following more people and interacting with them. You like football - why not follow Diego Maradona? Then, every time he mentions the "Hand of God", reply with "You're a filthy cheat!" That's the way most people use Twitter.

Or, for a good laugh, follow the Tablet! You've probably never heard of it, but it's a brilliant spoof account, parodying a supposedly Catholic newspaper. It tries to cram in as many heresies, mis-statements and sheer fantasies as it possibly can. You'll love it! 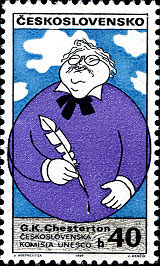 What do you think, folks? Shall I make this chap a saint? Bless! @pontifex

Finally, you need to have a regular circle of Twitter enemies, with whom you swap insults. There's no use talking to Richard Dawkins or Stephen Fry - they get upset too easily. Besides, your natural home is with the Catholics: they like squabbling on Twitter, so join in the fun. Say that you quite like Catholic Voices, and see how long it takes before you're accused of being a sockpuppet living in Brighton! 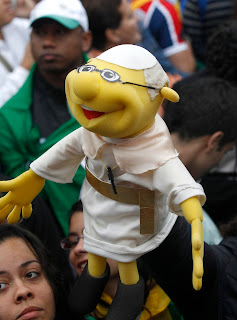 Is this a sockpope, or the real thing?