An interview with Arthur Roche

I was privileged to join Christopher Lambchop (of the Bitter Pill) and Christopher Whitebait (of the Fishwrap) in a sycophantic intervew of Uncle Arthur Roche, although I did not say much. 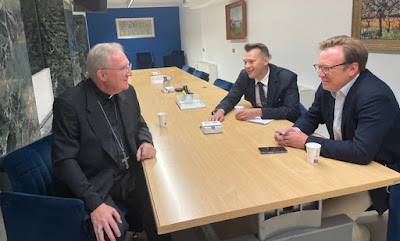 I also missed out on the photo. Chris (one or the other): Your Eminence, what is it like being the most wonderful Catholic of our era, or indeed any era? Arthur: I came from 'umble origins, Batley in Yorkshire. We used to live in one room, all twenty-six of us, no furniture, 'alf the floor was missing, and we were all 'uddled together in one corner for fear of falling. Chris: And now, who'd have thought that you'd be drinking Château de Chasselas and stuffing yourself with cinnabons, eh, your Holiness? Arthur: Aye, we 'ad it tough. But I worked my way to the top, first as a champion ice-skater, then Bishop of Leeds, then jobs in Rome, and - who knows? - will I be the next pope? I'm already sounding out little Austen Ivereigh to write a hagiography of me! 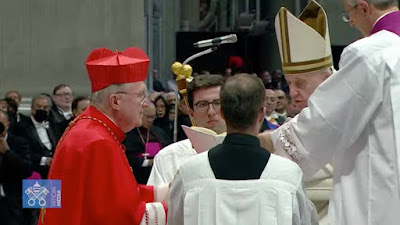 "I think I'd look better in white, Holy Father." Chris: I guess you first came to the notice of those above when you started closing churches in Leeds, your Sublimity. Wasn't the DVD that you produced explaining this top of the charts in Yorkshire for two years, O saintly one? Arthur: Yes, this was my finest hour in England. My idea has even been taken up by Pope Francis! Chris: Could you explain that, your Vastness? Arthur: All cardinals are assigned a church in Rome. Mine is San Saba. But the Holy Father has just sent me a DVD explaining that San Saba is to close, and all new cardinals are being given beach houses instead. Apparently, this was Ted McCarrick's idea. 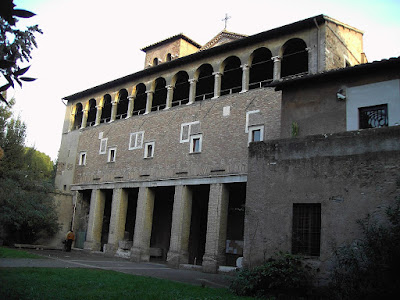 Closing down. Chris: A brilliant idea, your Rotundness. Now, tell us more about your plans to burn all TLM worshippers at the stake, if you'd be so kind, Mightiness. Arthur: Some people are stubbornly opposing what the Church - well, Pope Francis not Pope Benedict obviously - has actually decreed. Both Chrises: Sing adoration to Pope Francis! Arthur: It's a very serious matter. In the end people have to ask themselves: am I really a Catholic or am I more of a Protestant? Eccles (for it is he): You're more of a Protestant? Omnes: SHUT UP, ECCLES! "The dissolution of the monasteries? We're calling it Traditionis Custodes."
Posted by Eccles at 13:13