It has been reported that the 2020 Pontifical Yearbook, the Holy See's annual directory, has dropped the title of "Vicar of Christ" from its description of Jorge Mario Bergoglio, relegating it to a footnote - and we know from Amoris Laetitia that nobody trusts footnotes - as a "historical title". 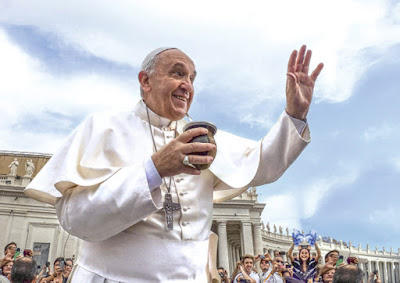 Francis has similarly lost some of his other titles:

It is said that Francis didn't like to be called "Vicar of Christ", as it sounded too much like "Vicar of Christchurch", which would make him an Anglican clergyman from New Zealand (or possibly Dorset), subsisting largely on cups of tea from grateful parishioners. However, it has always been a definite solecism to ask the Pope, "More tea, vicar?"

Just as it is bad manners to refer to someone by a pronoun xe doesn't want (Xe will be very offended), it is wrong to mis-title the Holy Father, Pope Francis, Deputy God (are we still allowed to use these titles?) So no more tactless references to "Christ" - they confuse him.