Since Pope Francis has kindly produced eight modern non-rigid Vatican-II compatible platitudes beatitudes for bishops (yes, really), we felt it would be helpful to produce a similar set for the use of popes. It may be regarded as the latest in our "How to be a good pope" series. 1. Blessed is the pope who makes poverty and sharing his lifestyle: this could include spending his humble wealth on financing lewd films, or perhaps speculating in the property market. For with his witness he is building the kingdom of Heaven, or at least some very nice apartment blocks. 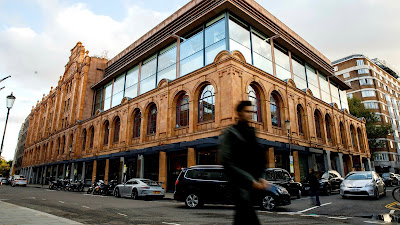 For sale. One infallible owner. Cash only. 2. Blessed is the pope who does not fear to water his face with tears, or if he cannot manage this, at least does not fear to scowl a lot. His face will mirror the sorrows of the people, which may mysteriously seem much worse these days. 3. Blessed is the pope who considers his ministry a service and not a power, who serves his flock by stamping out old-fashioned forms of Catholic worship. He will inhabit the land promised to the meek (having first kicked out the meek). 4. Blessed is the pope who does not close himself in the palaces of government, who welcomes visitors with Dubia to ask, or those with severe reservations about the state of the Church in distant oriental countries. For he will become a Zen master. [Is this what you meant to say? A. Spadaro.] 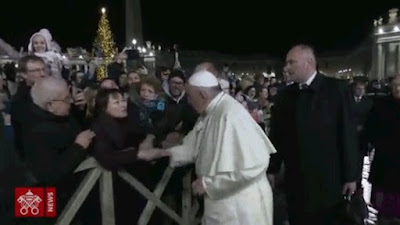 Welcoming the pilgrim. 5. Blessed is the pope who has a heart for the misery of the world, who is not scandalized by the sin and fragility of those such as Uncle Ted who helped him get the job. For he too may need some powerful friends one day. 6. Blessed is the pope who wards off duplicity of heart, who avoids every ambiguous dynamic. Although for a Jesuit this may be impossible, so let's leave this one until later. 7. Blessed is the pope who works for peace, who accompanies the paths of reconciliation, who welcomes new religions, especially pagan ones. For Mother Earth will bless him as her son. 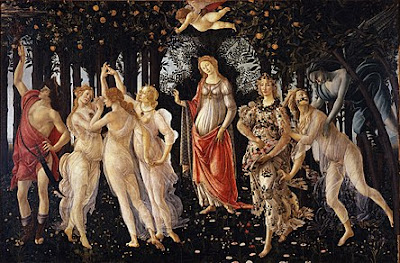 "Pachamama will be along later." 8. Blessed is the pope who for the sake of modernism does not fear to go against the tide, inventing new doctrines. For he knows that the Catholic Church must take a U-turn and go in a new direction every few years. From the Sermon in the Plane.
Posted by Eccles at 11:37