The toxic tradition of the Latin Mass

An edited version of a National Catholic Reporter piece by Zita Ballinger Fletcher.

One culture within the Catholic Church needing major reform is that surrounding the practice of the Latin Mass. 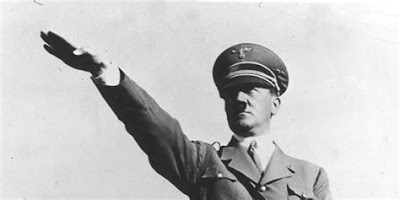 A typical devotee of the Latin Mass.

Even the name reeks of dishonesty. Some people call it in the Tridentine Mass, but I looked in my Big Girl's Atlas of the World and there is no country called Tridentia. No, the language is definitely Latin. As far as I can ascertain, nobody used Latin at Mass until 2007. If speaking American was good enough for Columbus, it's good enough for me!

I come from a strong Catholic family. We used to go to Mass regularly - sometimes as much as twice a year - and of course we didn't use Latin. EVERYONE understands American provided that you speak loudly enough, and that includes God! If He exists, of course... Still I decided to attend one of these Extraordinarily Formal Masses, to see what the fuss was about.

It should be obvious to everyone that Latin was the language spoken by Nero, i.e., the language of oppression. It's no coincidence that Latin Mass devotees like to pull the wings off butterflies.*

Indeed, it's fair to say that Latin Mass congregations are all basically fascist, racist, and LITERALLY HITLER. They weren't actually wearing swastikas when I attended, but you could see that they probably would when nobody was looking. I heard a rumour that Trump goes to Latin Masses in secret, so there you are.

And, phew! It is so sexist. The men don't wear skirts and mantillas, but many of the women do! In an attempt to fit in, I bought a special rainbow mantilla from James Martin Enterprises, but I got some funny looks when I wore it. Also, for some reason black is the preferred colour, not a jolly scarlet. Except for the men... 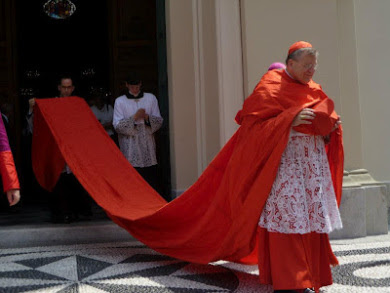 I wanted to dress like this, but they advised me not to.

Now let me describe the service in detail. The priest didn't smile at me once, unlike my own priest Father Doris SJ (he's looking into the possibility of transitioning, and why not?). The Catholic fascist priest kept using a "liturgy" rather than providing the clowns and puppets that we expect in the modern Church. I clutched my Pachamama doll and sobbed.

Before I went to the Mass they told me that a rosary was a very popular accessory to carry. I thought they meant roses, so I brought in a huge bunch of chrysanthemums and waved it at the priest's back (he rudely refused to face me). It turns out they meant a dangerous-looking chain made of beads. I'll bet they use them for garrotting anyone who puts a foot wrong. 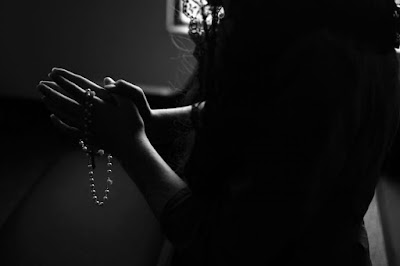 A rosary. Scary-looking, isn't it?

The people attending the Latin Mass kept referring to someone called Christ - unknown to me, although I am a good modern Catholic. They even had a prayer attributed to him, rather than some solid wisdom from the works of Pope Francis. My spiritual director told me later that Christ was an important figure in the pre-Vatican II Church, but his words were never recorded with a tape-recorder, so they could not be trusted.

Worst of all, the priest forgot to anounce the Hug of Peace in the Mass. I went up to him while he was gabbling away at the altar, nudged him, said, "You've forgotten the most important part of the service!" and gave him a cuddle. He said "Retro Satanas" which I think means "Hugs and kisses" and turned his back on me.

At this stage in the Mass, we usually have a liturgical dance. But everyone looked at me when I stood up and did the can-can while the priest was saying HOC EST something. Nobody joined in, although some did make face-palm gestures, so I suppose that may be the Tridentine equivalent. 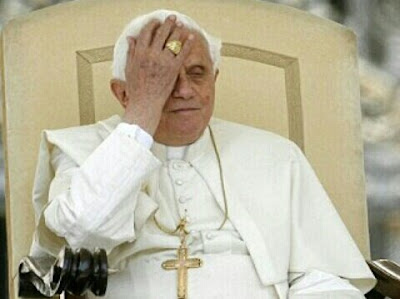 A typical reaction to my liturgical can-can.

And what's all this Gregorian chant stuff? You can't dance to it, at least not something lively. Get Gregory to write something new, I say, or else ask Marty Haugen and his mates to oblige!

I went up to receive the Lord's Din-dins, as we call it in my usual Church. The priest refused to put it into my handbag so I could take it away, and insisted on cramming it into my mouth! Also, I was expected to kneel at an altar rail, installed specially as a symbol of hate and oppression, as must be obvious to all of us.

Anyway, I think I've said enough for you to realise that I found the whole Latin Mass oppressive, sexist, racist, homophobic, Nazi, culturally imperialistic, alt-right, clericalist, rigid, and limited to narrow-minded rituals. STOP IT AT ONCE, I SAY!