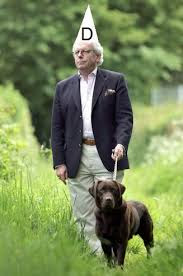 David Starkey with Gnasher, his guide dog for the hard of thinking.

Pope Francis has lost no time in reacting to David Starkey's recent intemperate comments about the Catholic church; he took time off from his busy schedule today to point out that Starkey was an "irredeemably stupid" man. Speaking in theological terms, Pope Francis pointed out that Jesus came to redeem sinners, but nowhere is it recorded that He healed the arrogant, the pompous and the very stupid. "Sorry about that, David!" he quipped, before jumping onto a bus. 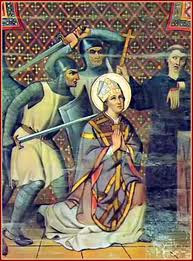 David Starkey, who was believed to be out of his mind at the time, had said "I want to declare that Thomas Becket is the patron saint of child abusers." However, Mrs Duffy, a teacher of history and moral philosophy at a local primary school, gently pointed out to him that child abusers did not deserve a patron saint, and that Thomas Becket was never even associated with this crime. However, Starkey replied, "I'll say what I want if it gives me publicity. Poo poo poo!" 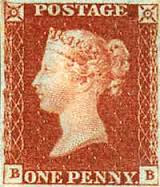 Laurie Penny (Penny Red) has also criticised Starkey in the past.

Starkey is no stranger to controversy (for example, he has been accused by Laurie Penny of "playing xenophobia and national prejudice for laughs"). In fact what he is really a stranger to is acting like a normal decent and polite adult, rather than the sort of gibbering idiot who comes and sits next to you on a bus. Woeful. 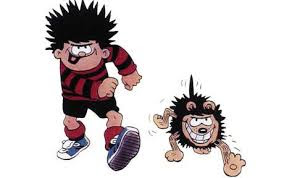 David Starkey, as a young boy, with Gnasher.