Thanks to our personal contacts at the Vatican (old Cormac the handyman), we can give an exclusive transcript of the deep and far-ranging discussions held today between President Hollande of France and Pope Francis. 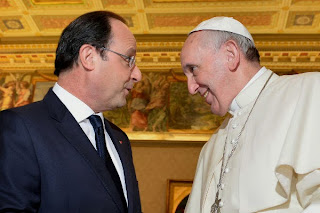 Would you like to meet the First Lady of France? Or the Second? Or the Third?

Hollande: Forgive me, votre Popenesse, for I have sinned, and I'm going to carry on sinning.

Pope: So, I've heard. I wanted to talk to you about the issue of same-sex "marriage".

Hollande: I didn't know you cared, mon ami. It would be modern of me to appoint a First Gentleman or two, as a change from all those First Ladies, ... 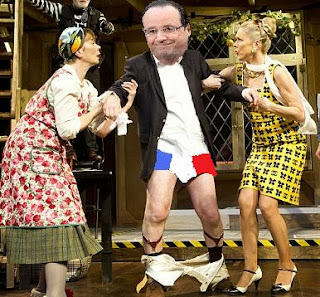 Domestic problems at the Elysée Palace.

Pope: Oh, never mind. I was going to bring up the subject of abortion, too, but I know you wouldn't listen.

Hollande: Sacrée Vache! This is not open to negotiation. So what can we talk about?

Pope: Well, it would look odd if you went home again after just one minute's deep and far-ranging discussions.

Hollande: On the other hand, if we talk about anything serious, you're going to punch me sur le hooter, aren't you?

Pope: Well, can we find something uncontroversial to chat about while they take some photos?

Hollande: Eh bien! What do you think of the new version of The Three Musketeers on the goggle-boîte?

Pope: Well, I appreciated that portrayal of Cardinal Richelieu as a cunning and devious man, the real power behind the throne. I've got quite a few like that. 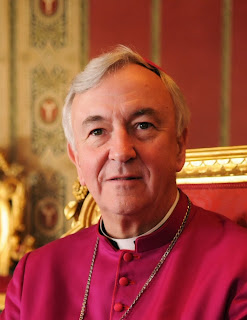 Cardinal Richelieu - his agents are everywhere.

Hollande: Ah, in France we keep the Church in its place. Did you get round to seeing Father Brown?

Pope: Yes. Too many anachronisms, I thought, but who am I to judge?

Hollande: It's true they didn't have light sabres in the 1920s.

Pope: Or clown masses. If they had, I'm sure Chesterton would have mentioned it. 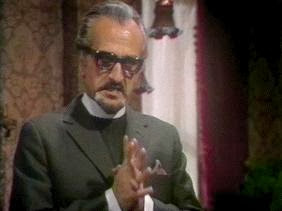 Father Brown prepares to attend a meeting of ACTA.

Hollande: Well, that's enough chatter. What shall we say in our press release?

Pope: We had an amicable discussion of the urgent issues facing the world.

Hollande: Yes, I'll go along with that. Oh, and I've brought you une bouteille de vin... 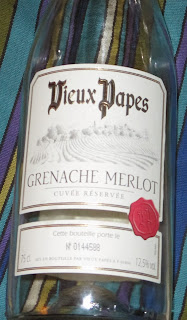 A little gift for Pope Francis and Pope Benedict.