The comedian, actor, radio host, author, and activist Russell Brand has announced to his adoring fans that he has become a Catholic. Apparently, after flirting with revolutionary socialism for a month ("which is longer than most of my affairs last") he has decided to become a revolutionary Christian instead. 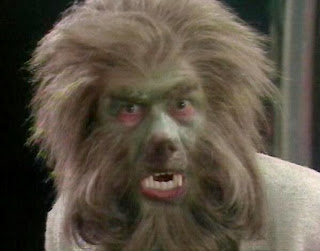 Pope Russell I (as he will be known).

Brand admits that he is new to this "religion business" but expects to rise quickly through the ranks, and to become Pope shortly before giving up the whole thing out of boredom. When we asked him if he had received the "call" from God, he replied, "Yes, and He left a very rude message on my Ansaphone! Such people should be locked up!"

Apparently, Brand has a new book to sell (the Gospie Wospie according to St Russell), which contains many valuable new insights into the life of Jesus, who is revealed to have been a comedian, actor, radio host, author, and activist, secretly married to St Katheryn of Perry. "I'm really writing about the only thing that interests me," admits Russell, "Myself!"

According to Wikipedia, Brand describes himself as "a person who’s trying to live a decent, spiritual life". If that is really the case, he may not get very far in the Catholic hierarchy within the month or so that he has given himself to take over the Church. But who are we to judge? 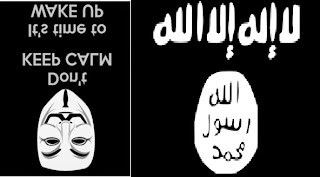 Lookalikes: the Million Mask flag, and the ISIS flag.