Civil war in the Catholic Church

Adapted from a Spectator article by Damian Thompson.

Make no mistake, the Catholic Church is facing its biggest crisis since 1517, and Pope Francis is now embroiled in a "no holds barred" civil war. All the enemies that he has made in the last eighteen months - an alliance of self-absorbed, Promethean neo-Pelagians, airport bishops, existential tourists, church climbers, rosary counters, and promoters of the poison of immanence - are ganging up against the Holy Father. 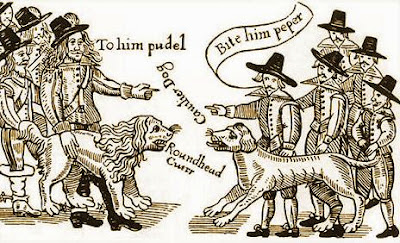 The cardinals square up to one another.

The two sides in the English civil war, have been somewhat inaccurately described described as "wrong but romantic" (Cavaliers) and "right but repulsive" (Roundheads). In fact, given Cardinal Kasper's views on Africans, we can identify some cardinals who qualify as "wrong and repulsive". 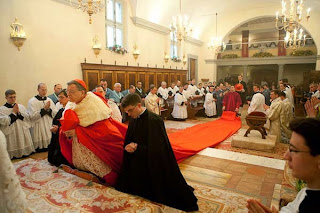 "This will annoy the Pope!" Burke aims to be right and romantic.

Perhaps the American civil war is a better model for the present conflict. However, "Abraham Lincoln" sounds more like the title an Anglican bishop of Lincoln would adopt, so I am not sure where that leaves us (the present incumbent is no doubt very embarrassed when he has to sign hotel registers as Christopher Lincoln and Mrs Lowson). 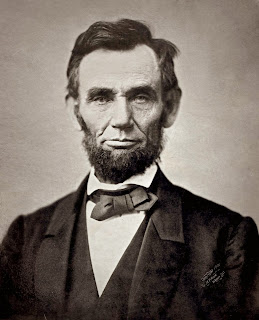 Probably not a bishop.

Let's go back to the English model of a civil war. So far, we have seen a few skirmishes on English soil. Norwich has fallen into the hands of Colonel Hopes's forces, and has had a pontifical Latin Mass celebrated from the throne for the first time since A.D. 597 or thereabouts. Pope Francis is said to be livid. Colonel Egan in Portsmouth has thrown the notorious Paul Inwood to his dogs, while Colonel Davies is making Shrewsbury into an impenetrable stronghold.

But things have also been going well for the forces of modernism and liberal Catholicism. It is true that Colonel Conry was humiliated in Arundel and Brighton, but General Nichols has a firm grip on Westminster, and has even despatched his sidekick, Colonel Stock, to occupy the northern fortress of Leeds. 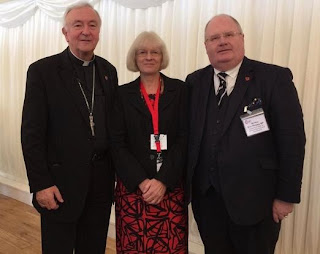 Squeezed between Nickles and Pichols.

Back in Rome, the Pope is under attack. For one thing, he's a Jesuit, which is often seen these days as something like a cross between a con-man and a politician. His "Who am I to judge?" line is probably the most-quoted line by any recent Pope, even if the obvious reply, "You're the Pope, aren't you?" is less commonly repeated. Expert pope-watchers tell me that he is also a liberation theologian and a football fan.

And now another voice is being heard. The Doctor's arch-nemesis, Pope Benedict, whom nobody expected to see again, has survived the Time-War between the Time-Lords and the Daleks, and has been reincarnated as a women called "Missy". He (or she) is planning to turn Basil Loftus into a Cyberman, which could be a distinct improvement. I'm sorry, I seem to have turned over two pages of my notes at once. 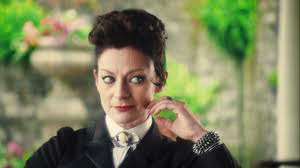 Pope Benedict is back!

Better wrap this article up now, I'm nearly at the Spectator's word limit. Moderate conservative Catholics such as my friend Cristina Odone (stop laughing at the back, there!) say that they are simply confused by Pope Francis. Is he St Peter, is he Henry VIII, or is he Barack Obama? Or is he just a very naughty boy?

Will this do? I'm a bit out of practice. Next week's piece on Rachmaninov will be better, I promise. DT.