The Secret Life of Pope Francis

With humble apologies to James Thurber.

Greta Thunberg stood up on the podium. "I present to you Pope Francis, three times winner of the Nobel Peace Prize for his work on the Environment, twice winner of the Economics Prize for Vatican accounting, as well as the Nobel Theology Prize, the Nobel Prize for Literature, and the Nobel prize for Chemistry," she said.

"I now have pleasure in presenting him with the Greta Thunberg Medal for Saving the Planet. His pioneering work Laudato Si', which told us that plastic straws are melting the glaciers, cooking our food is killing the polar bears, and that our use of electric lights is causing the penguins to leave Greenland, contains all that we need to save the world."

Francis stood up and thanked Miss Thurnberg. "I am deeply humbled, as well as humble," he said. "As I have always preached, there is no problem with rioting, looting, and burning down shops, provided that you always plant a tree afterwards..."

Cardinal Parolin nudged the Holy Father, who came out of his daydream. "Shall we give up this year of Laudato Si' celebrations, your saintliness?" he asked. "It was hard enough spinning it out to one week, but a whole year of it will bore the chasubles off people. Especially with everything else that's going on."

Francis started. "Oh no!" he said. "Not until I have done my world tour to reduce CO2 emissions..."

Air Ace "Red Baron" Bergoglio took his plane into a dive over Southampton. "Take that, British pigs!" he said. "Historically, the Isle of Wight has always been Argentinian!"

The war had continued for nearly forty years, but, thanks to the indomitable Bergoglio's Flying Circus, the British were now on the defensive. Malta had been conquered, and the evil dictator Matthew Festing sent to Boese Lager, a camp for dissidents. Now the war was in its final phase, and the Red Baron was ready to go in for the kill. PACHA-PACHA-MAMA-MAMA went his guns... 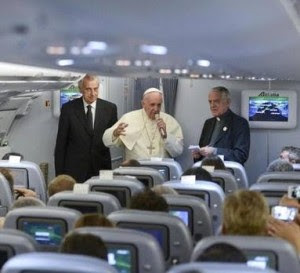 "We're coming into land, Holy Father," said glamorous air hostess Tina Beattie, giving the Pope a sudden nudge. "Could you return to your seat and fasten your seat belt please? The passengers are complaining that they've heard enough new doctrine for one day."

Pope Francis's reverie came to an end, and he returned to his seat, pushing past some journalists who were blocking his way.

"We now come to the main fight of the evening," came the announcement over the tannoy. "In the red corner, Jorge Bergoglio, the Terror of Buenos Aires, who worked his way up from being a humble nightclub bouncer. In the blue corner, Dr Wuhan Flu, known as the Chinese Pestilence, who has left a long trail of wounded. I want a clean fight, now, no gouging, spitting, kicking..."

The referee checked the contestants for concealed weapons, removed two small idols of Pachamama from Bergoglio's gloves, and started the fight. The Terror of Buenos Aires rushed out from his corner and - PACH! - he floored the poor Chinaman with a single blow..." 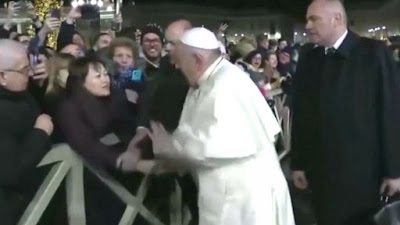 "Oh Heck," said Archbishop Gänswein. "You didn't have to slap that poor Chinese girl so hard. Now we're going to have to find an excuse..."