In a previous post we asked Sister Judy Piranha of the Nuns of Herod to explain why voting Democrat was the only reasonable possibility for an American Catholic. Now, to redress the balance, we present Supernun! 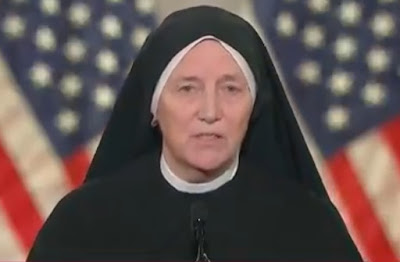 Sr Deirdre (a.k.a. Dede) is no ordinary nun. Trained as an army surgeon, she can strangle heretics with her bare hands and kill them with a single blow - medical knowledge comes in handy! According to Wikipedia she is also a world-class distance runner, but that could be someone else.

Anyway, her super-powers include flying, X-ray vision, and laser-like eyes which can melt steel (making her stare the most piercing since Mother Angelica's). She also has breath that can freeze a Jesuit at ten paces. 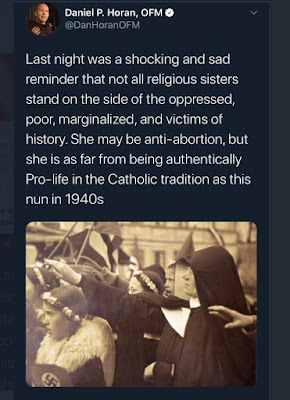 The Horan of Babylon is not amused.

You can tell that Supernun is making an impact - Daniel Horan of Babylon, a well-known opponent of pro-life activities, threw a hissy fit and played the Nazi card. If his picture is anything to judge by, he has already had his hair vaporized by the piercing glare of Supernun!

Horan is also very worried about the weaponised rosary of Supernun! It seems that he doesn't mind rosaries as a fashion accessory, to go with that lovely Chanel robe he wears, but woe betide you if you use them as a way of fighting evil!

Another well-known Democrat, Fr James Martin LGBTSJ BOTA (Beast of the Apocalypse) is also throwing a wobbly at the special powers of Supernun! His argument is that religious people should not endorse politicians. Of course, he has praised Biden and attacked Trump on many occasions - he threw a memorable tantrum when Donald was elected - but nobody could possibly deduce anything about his political views from that!

But enough - in fact too much - of Jimbo the Clown. 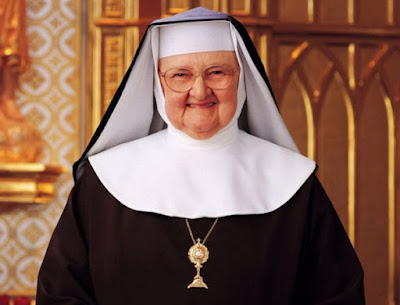 Coming soon, the adventures of Supermother!