How to be a Catholic

Many readers have written to me, saying, "I'm just an ordinary sort of guy, who would quite like to be a priest/Pope/President of the USA/lion-tamer/serial killer/celebrity chef and I feel it would improve my career possibilities if I were a Catholic. Can you help me?" 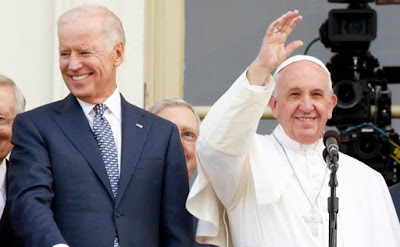 How many Catholics can you count in this photo?

Now, it is surprisingly easy to be a cradle Catholic, as Fr James Martin points out. First, your parents must own a cradle, and put you in it. Next, you are taken along to a church, and baptised in the name of the Father, Son and Holy Spirit. You can sleep through the whole sacrament, if you wish to.

Also, even some non-Catholic baptisms are valid (e.g. the Anglican version): the important thing is to get the form of words right, so that, for example, the following are invalid:

Anyway, if you want to be a Catholic, and not have to worry about it again, then it's best to get a Catholic baptism. Otherwise you have to convert later, and Austen Ivereigh will describe you as "neurotic".

See? That was easy.

But how do I stop being a Catholic?

This is not as easy as it sounds. You can do almost anything you like, and nobody will turn a hair. Yes, yes, there is excommunication latae sententiae, and that even includes apostates, heretics, and schismatics, but nobody important is going to speak out and say you are no longer a Catholic (except for special cases such as Queen Elizabeth I).

Other things you can do to be excommunicated l.s. include hitting the Pope (so that Chinese girl was wise not to retaliate when he slapped her), and procuring an abortion (on the other hand, facilitating thousands of abortions is permitted). Watch out, if you are a bishop, as ordaining someone without permission is also an offence. It's not clear whether laymen can ordain people without permission. But let's be realistic, if Fr James Martin LGBTSJ and the blessed Joseph Biden are in no danger of excommunication, you can be Catholic in any way you like. Strictly speaking, Catholics should do saved person stuff once in a while - prayers, Mass, Confession, reading this blog, ... but you'd be surprised how many Top Catholics simply don't bother!