Flying back from Kraków, Pope Francis became tired of reading the souvenir magazine, Pole Dancing for Catholics, so he stood up and gave yet another impromptu off-the-cuff press briefing. This was instantly seized on as either a fundamental change to Catholic teaching or yet another non-event, depending on whether you read the Tablet or else some of the Catholic papers.

"I do not like it when people associate Catholic Voices with violence," asserted the Holy Father. "I know that Austen Ivereigh is greatly feared in Catholic circles, but he is basically a peace-loving man, even if he does occasionally come out with statements about Islam that would turn Damian Thompson's hairpiece white." 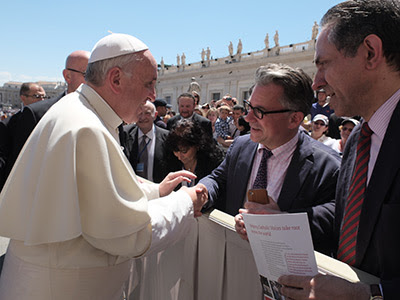 Francis (protected by a barrier) "reaches out" to Dr Ivereigh.

Every day we read in our newspapers, or see on television, signs of people being intimidated by Catholic Voices. The amazing Caroline Farrow, who has spoken out on Catholic issues on so many television and radio programmes that we have lost count - these include Strictly Come Dancing, Match of the Day, and even Midsomer Murders - can reduce a secularist to a quivering heap of jelly in 30 seconds flat. Even the Archbishop of Corby hides under the baked bean shelves at ASDA when he hears Mrs Farrow on the radio.

However, Pope Francis claims that such people are essentially peaceful. "Take Greg Daly," he said. "Yes, do take him. He tells me he's the only man in the world who understands the Irish question, and occasionally people have fallen into a coma when he tried to explain it to them. But people can fall into comas for other reasons, you know, and one should not blame Catholic Voices for that." 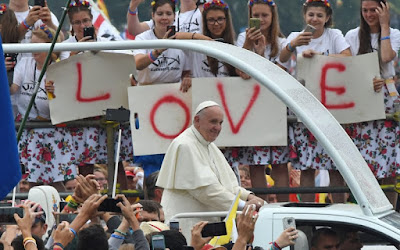 In another announcement, Pope Francis commented on the success of World Youth Day. "From now on, we're going to have similar smaller-scale events in every town in the civilised world. They will take place on Sunday mornings, mostly, and involve much smaller gatherings of Catholics for Mass. Obviously, I can't be everywhere, so I am appointing a group of deputies to do the 'Hey, I'm the big superstar' bit. I've even thought of a catchy name for them - priests!"

Here we think Pope Francis may - for once - have gone a little too far.