France gets tough with Catholic terrorists

Following Pope Francis's wise comment, "If I speak of Islamic violence, I also have to speak of Catholic violence," President "Flanby" Hollande of France expressed himself "delighted" at his recent achievements in suppressing Catholic terrorism in Paris. 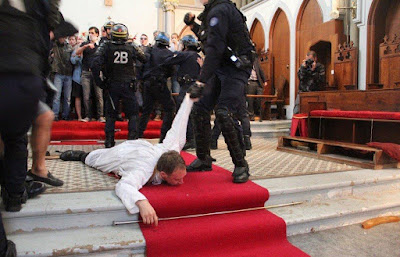 Today in the church of Sainte Rita in Paris, which is due for demolition so that a much-needed car park can be built, Inspector Clouseau and his merry men interrupted a Mass, dragging away the priest, altar servers, and congregation (including some pregnant women). As M. Clouseau explained "The priest refused to face me, but turned his back to me and started saying incantations in a foreign language - no doubt the Catholic equivalent of Allahu Akbar. I had no choice but to arrest him as a suspected terrorist." 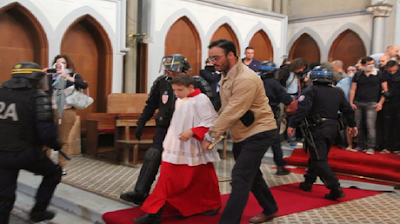 One of the priest's accomplices is led off to the guillotine.

Celebrating this triumph, M. Hollande commented that it came only a week after the death of Fr Jacques Hamel. It will be recalled that Fr Hamel was guilty of a hate crime, in that he shouted at two peaceful knife-wielding gentlemen of foreign extraction who happened to be visiting his church. 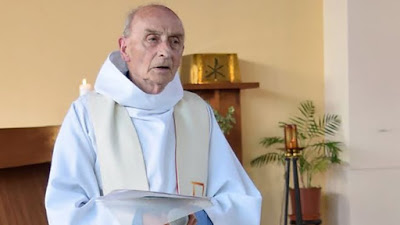 When Policier Plodde arrived on the scene, he was grateful to the two visitors, Adel Kermiche and Abdel Malik Petitjean, for dealing with the "hate crime" situation so effectively. However, it was distressing to learn that, owing to a mix-up, the two visitors had also been killed. 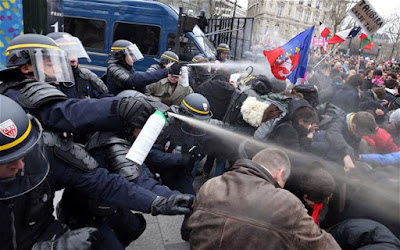 Their finest hour - Les Flics use tear gas on demonstrators against mock "marriage".