We left my bruvver Bosco hidin in an Ecuadorian souvenir shop "Llamas 'R' us," run by de mysteriuos Juliano Assangua. But you cannot keep a good man down for long, and it was no surprise when he turned up at Castle Thopmson in Notting Hell, where Anti Moly and me is stayin.

Apparently, Bosco has got a new obsessoin, and now he hates images of muvvers and babies, cos dey reminds him of de Madonna and Child. 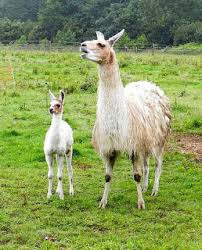 Mother and baby. A symbol of Catholicism.

So he got cross when he saw de pitcher above, wot is a lama wiv her baby, and smashed it. After dat he had to leave "Llamas 'R' us," so he came to London to be wiv his nearest and dearest (me and Anti Moly).

Bosco was explanin to us dat pitchers of Mary and Jessus was reely based on de Babbleonions Semiramis and Tammuz - notice de grate cioncidence dat dey both features a muvver and a baby. You don't often see muvvers holdin babies, so dat proves it's de same poeple. 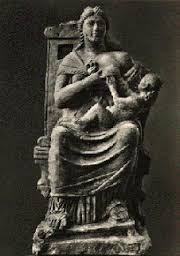 Semiramis and Tammuz. A symbol of Catholicism.

Anyway, to get to de main story, our host Damain Thopmson wrote annuver luvvly blogg, which started as follows:

I have just rediscovered a playwright who will probably be totally unfamiliar to most of my readers. He's called William Shakespeare, and he's definitely one to watch. When I was a child my teacher, Mr Pegnall, took me to see Hamlet, which is a jolly super play in which everyone gets killed. I had a whole bag of cupcakes, and was sick over Mr Pegnall. Soon I am going to see King Lear, which my friend Daniel Hannan says is a searing indictment of the European Union.

I have just built a "Gladys Chapel" in my home, Castle Thopmson, where I pray each day to St Gladys of Mills... 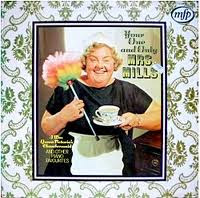 Anyway, this explains why Damain, me, Bosco, and Anti Moly is sittin in de theatre, watchin a performance of King Lear. It's a rather complicated story about a king wot gives away his kingdom and goes mad, and I wonder if dat is an allegorry for what happened to Damain when he stopped bein a relligiuos blogger.

Anti Moly said she liked de play very much. When Gluocester got his eyes guoged out, she shouted "Hooray!" and explaned dat dis was de way to treat traddy Cathlics. Then when Gluocester got to de edge of a cliff, she shuoted "Go on, jump!" but was disappointed dat he survived dat bit. 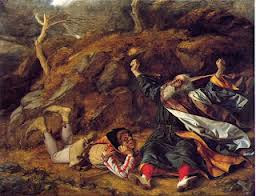 Bosco made up his mind dat de main poeple in de play weren't saved, except for de fool, a pusson like Bosco wot seems to be totally mad. Unlike Bosco he is in fact very wise, and maybe even saved. Bosco said de best lines in de play was "There's hell, there's darkness, there's the sulphurous pit, Burning, scalding, stench, consumption; fie, fie, fie! pah, pah!" Dis is only what unsaved pussons can expect.

Damain was, as usaul, more interested in de pussonal quallities of de characters. He knew dat Edmund was a baddie cos he had got bad hair and was slightly overwieght. Dese are de sort of detales dat will only be noticed by a quallity juornalist and critick.

Well, now dat Bosco is in London, we expects him to make a tuor of Cathlic churches in order to save dem from dere sins. Lock up your iddles!

Soon you will no longer be able to worship dis iddle.