Enda gets a knock.

Over now to Knock in Ireland, the site of the National Marian Shrine: and we have a most unusual pilgrim at the airport.

Knock, knock! Who's there? Enda. Enda who? Enda Life.

Eccles: We are indeed fortunate today to have a visit from that most pious of Catholics, Enda Life, the Teashop of Ireland. Especially at a village known for its shrine to the Blessed Virgin Mary, a woman who carried Jesus in her womb and spent 9 months complaining about it. Good morning, Enda. What are your thoughts on arriving at this sacred place?

Enda: Well, I was thinking that the way to solve Ireland's problems is to bring in liberal abortion laws. As a faithful Catholic, I know that this was something very dear to the heart of Mary. 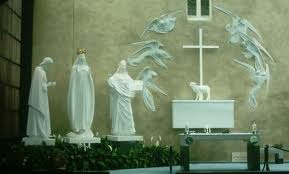 Mary, a figure who has greatly influenced Enda Kenny.

Eccles: Have you discussed this with a priest? If you ask Cardinal Brady politely, he may just be prepared to grant you an interview. I gather that his views are somewhat different.

Enda: Look, am I or am I not allowed to decide for myself what Mary would have wanted? Isn't the Massacre of the Innocents a great Catholic feast?

Eccles: Well, not exactly. You may have got that slightly wrong. 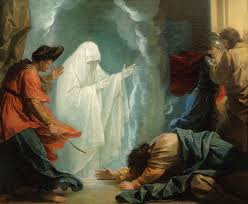 The Witch of Enda urges Saul to bring in abortion legislation.

Eccles: What if I'm not pregnant?

Enda: Oh just kill a random baby. It doesn't much matter whose. We call it "the protection of life."