Doctors monitoring the state of Michael Coren, the Catholic Evangelical Catholic Anglican Druid writer have expressed themselves as pessimistic about the possibility that he can be saved. Since swimming the Tiber for the fourth time (and becoming eligible for a Frequent Swimmer Gold Card), Mike has shown a distinct inability to laugh at his predicament, and - unlike the rest of us - is taking himself far too seriously. 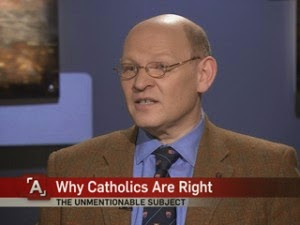 We have made attempts to bring a smile to the face of Mr Coren (after all, he is supposed to be keen on "gay" issues). These include tickling him with a feather during his latest television interview, putting a whoopee cushion on his seat when he attended (Anglican) church, and reading out in a silly voice some passages from Why Catholics are Right. All to no avail, he's still Mike Misery-Guts. 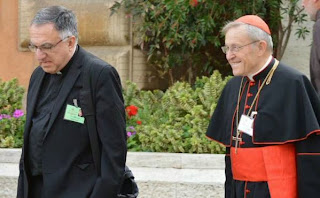 Kasper has just stuck a "Kick me" sign to the back of Fr Rosica.

Contrast this with the demeanour of his Eminence, Cardinal Kasper, who has a somewhat perpetual grin. Wally Kasper's views are not very different from Mike Coren's, but he has managed to avoid donning the old life-jacket and plunging into the Tiber. Of course, some regard the Kasper grin as a sign of mania, but it's better than scowling all the time. 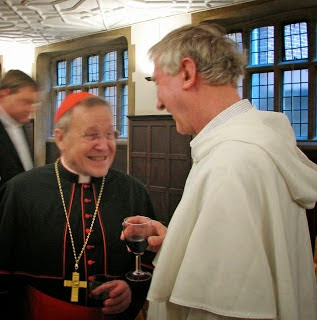 "So then his Holiness saw the sign and gave him a kick!"

Another smiler who makes the good folk at the Congregation for the Doctrine of the Faith throw up their hands in disgust is Fr Timothy Radagast the White, who has been packed off to Rome as consultor to the Pontifical Council for Justice and Peace. We were hoping that this was a non-job, designed to keep him out of trouble, but unfortunately Timmy Radish - who, like his namesake keeps coming back leaving a nasty taste - will probably consider that drivelling on about homosexual rights is the main purpose of Catholicism. 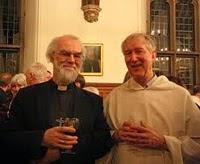 So, Mike, why not come back again to the Catholic Church - it will get you a mention in the Guinness Book of Records, and as a Frequent Swimmer you'll get complimentary champagne and fatted calf! After all, your ludicrous anti-Christian views are already shared by some very senior types in Rome! Think about it, OK?